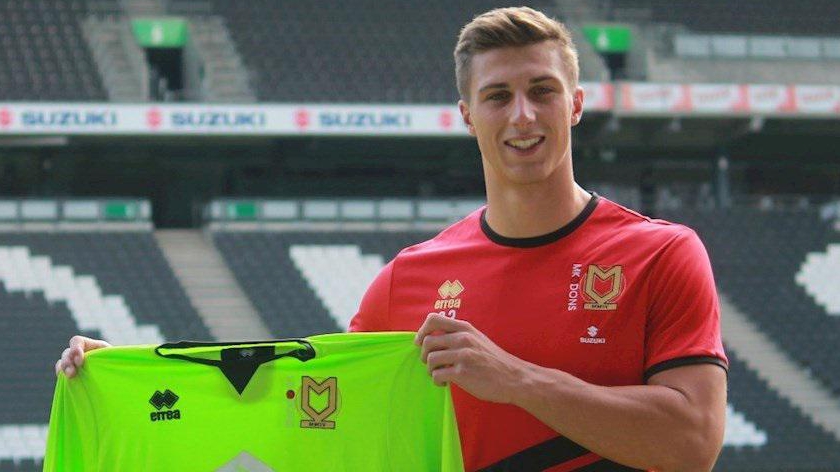 MK Dons manager Paul Tisdale has continued to add to his new squad with the signing of goalkeeper Stuart Moore, his tenth since taking over at the club.

23-year-old Moore joins the Dons after leaving fellow League Two club Swindon Town, whom he had spent the second half of last season with.

As he is an under-24, out of contract player, Swindon are due compensation and the two clubs are discussing an appropriate settlement.

The Isle of Wight native rose through the ranks of Reading before spending a number of years out on loan in the lower leagues.

He left Reading last summer and joined Barrow AFC in the National League, making 18 appearances before leaving the club in January.

He was subsequently signed by Swindon in the league above and he made ten league appearances as The Robins finished 9th in the fourth tier.

Moore is now likely to compete with Dutch stopper Wieger Sietsma for the team’s backup goalkeeper role, with Lee Nicholls entrenched as the team’s number one.

Moore said to iFollow MK Dons: “I’m very pleased to be here, it’s nice to get it done before the season starts and now I’m very much looking forward to getting going.”

“Everyone knows that MK Dons is a massive club and it’s great to be a part of that.”

“Speaking to the manager and to Mel [Gwinnett] about the ambition of the club and hunger to do well and succeed - I want to be part of that.”

“I’ve met the goalkeepers here and they seem really good lads and are two good goalkeepers. I know we are going to push each other and competition is always good.”

First Team Coach Mel Gwinnett commented: “Stuart is a young keeper that I first became aware of during my time at Exeter City.”

“The thing that struck me with him was how positive he was off his line and how he liked to dominate his box.”

“He’s very competent and is a keeper that, at the age of 23, can only develop and improve.”