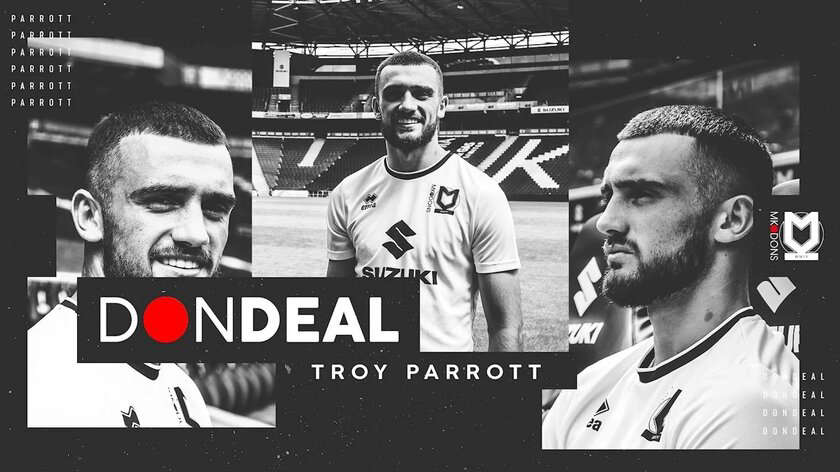 Capped six times for the Republic of Ireland, Parrott has already tasted life in the Football League, having spent the 2020/21 season on loan - initially with Millwall in the Championship and Ipswich Town in League One.

In total, the Dublin native earned 32 appearances in all competitions last season, scoring two goals in League One while playing at Portman Road.

Parrott will now battle with Mo Eisa, Max Watters and Charlie Brown for regular minutes in the Dons first team, giving Martin plenty of depth along with a group of players eager to earn their place in the team.

Speaking of his arrival, Parrott commented: "I’m really happy to be here. The way that the team plays suits me and the way that I want to play – I’m looking forward to being a part of it."

"Russ has wanted me to come here previously but for one reason or another it hasn’t happened. He’s made it known that he wants me, which is a good feeling to have. I’m just happy to be here now and I can’t wait to get going."

He concluded: "I hope to bring goals to the team, of course, but I also want to contribute by linking play and getting on the ball as much as possible. I saw last night how good the team is at creating chances and, as a striker, I can’t wait!"

Speaking of his ninth new addition to the team, Russell Martin said: "Troy is somebody we have had our eyes on for a while so we are delighted to be able to work with him."

"There was a lot of interest in him so we are thankful to Spurs for trusting us with his development, but also to Troy for his commitment and desire to be here. We are excited to see what he can do for us this season."

Sporting Director Liam Sweeting added: "First and foremost, thank you to Tottenham for trusting us with Troy’s development."

"We’re obviously very pleased Troy chose MK Dons as his destination this season. Troy is someone we have watched develop closely since coming through at Spurs and I see this as a very good match in terms of his attributes and our style of play. He is a determined, competitive and all action striker who thinks goals."

He concluded: "Last season almost ended too early for him as he was playing well for Ipswich and then for Ireland over the summer, so we’re excited to see him continue that momentum with us."