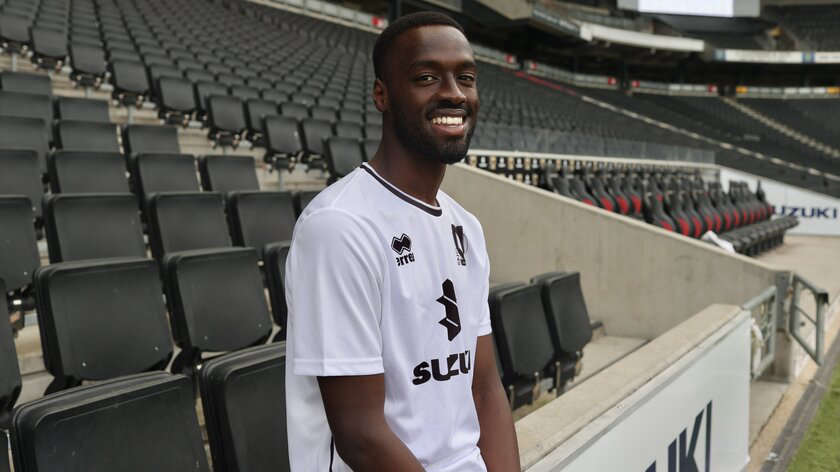 Milton Keynes Dons have today announced the signing of striker Mo Eisa on a permanent transfer.

The Dons have been working to bolster a thin attacking group, adding Max Watters on loan earlier in the summer transfer window, and now the club have snapped up Mo Eisa from Peterborough United for an undisclosed fee.

The Sudan-born 27-year-old becomes the Dons' seventh new signing this summer, joining on a long-term deal for Russell Martin's side.

Eisa has been a proven goal scorer in the lower leagues of the Football League, having scored 23 goals in a single League Two season for Cheltenham Town in 2017/18 as well as 14 goals in League One with Peterborough in 2019/20.

He had a down season by his standards in 2020/21, with five goals and three assists in 35 total appearances, but a move to Milton Keynes and working within Martin's attack-minded system should see the striker recapture his previously demonstrated form.

Speaking of joining the Dons, Eisa commented: "I’m excited to be here. This is a massive club with huge ambitions that match my own, and I will give my all to help take MK Dons forward."

"I knew there was interest from back in January and then again this summer. My agent presented me with a few teams who wanted to sign me and I felt MK Dons was the right team for me."

He continued: "I am very excited to work under Russell Martin, as he was a huge influence in me making my decision to join the Dons. I’m looking forward to the style of play as I feel it plays to my strengths and will give me the opportunity to score goals."

"I am a goal scorer but most importantly I am a team player and I always try to do my best for the team to win."

He added: "I’m excited to play at this stunning stadium and can’t wait to make my debut in front of fans - hopefully I can score loads of goals for them."

His new manager said: "This is a massive signing for us. Luke Williams and I identified Mo really early on as our top target to make a difference to this team, and we have been chasing him all summer."

"I’m pleased we’ve finally got to a point where we’ve agreed a deal, and I want to say a massive thank you to the Chairman and Liam Sweeting for their work and support in getting this over the line."

"He comes with brilliant experience at the level. He’s a proven goal scorer and that has earnt a couple of big moves - that’s great credit to him. He’s really hungry to do well and that desire has been a huge reason as to why this move has been completed."

He added: "We’re excited to have him onboard and look forward to integrating him into the team ahead of the new season."

Sporting Director Liam Sweeting added: "I’m delighted that we have been able to get this completed. Mo is someone we have known and admired for a long time and whenever we sat down together to discuss strikers this summer, Mo was a name we kept coming back to."

"A key strength of our recruitment has been our ability to react, and the way we are operating in terms of player trading has enabled us to make a substantial move in signing Mo at the first opportunity a deal was viable."

"I must thank both the Chairman and Mo’s representatives for the relentless work that has gone into making this happen."

He concluded: "It was clear that Mo wanted to become an MK Dons player and I look forward to seeing him very soon at Stadium MK."