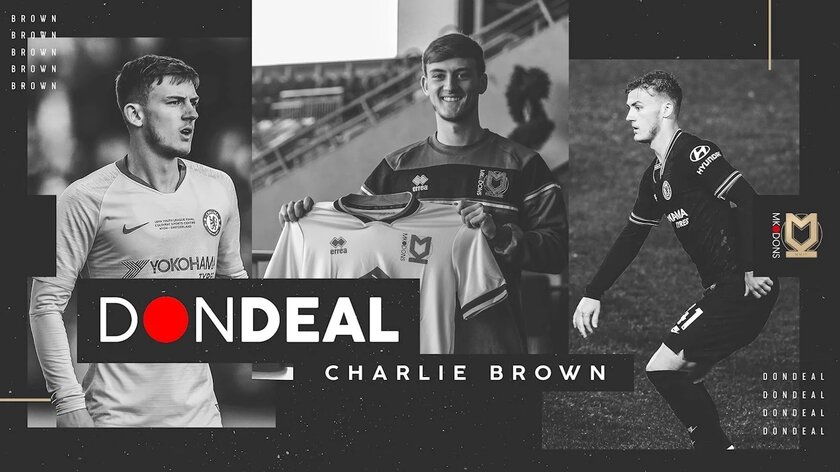 With Carlton Morris departing the club to join Championship outfit Barnsley at the start of the transfer window, the Dons needed to bring in reinforcements up front and have done so with a player that has been prolific at various youth levels.

Brown has spent the past four-and-a-half years playing for the Chelsea youth sides, winning back-to-back Under-18s league championships and was the top scorer in the UEFA Youth League with 12 goals in just nine appearances.

Last season saw Brown have a taste of professional football with a brief loan spell with Belgian First Division B side Royale Union SG, whom he initially returned to on loan at the start of the 2020/21 season before returning to Chelsea in October.

Now, he will have an opportunity to earn first-team football at Stadium MK and can learn from the likes of Cameron Jerome, who has played at all levels of the game and currently leads the line for the Dons.

Speaking of joining the Dons, Brown commented: "I’m over the moon to be here, this is an opportunity I’ve been waiting for and I can’t wait to get on the pitch and show the fans what I can do."

"The Gaffer has got a really strong plan for the team and I’m really excited to be a part of that and have the opportunity to help the Club get to where it wants to be."

"I’ve seen the way the team plays, with a lot of possession and creating a lot of chances for the strikers. It’s going to be up to me to finish those chances off and I’ll be looking to do that as often as I can!"

Speaking of his latest signing, boss Russell Martin commented: "Charlie is someone we’ve been monitoring for a while now and when it transpired that we could sign him, we jumped at the chance."

"He’s shown a lot of intent to come and play for MK Dons – turning down some more lucrative offers because he believes in what we’re doing here."

"I believe the way we play and the culture we’re building will suit him really well. He’s scored a lot of goals at youth level but I believe we can improve him even further."

He concluded: "In the long term, he’s going to be a very, very good signing for the Football Club and I’m confident, once we get him up to speed, he will help us in the short-term as well."