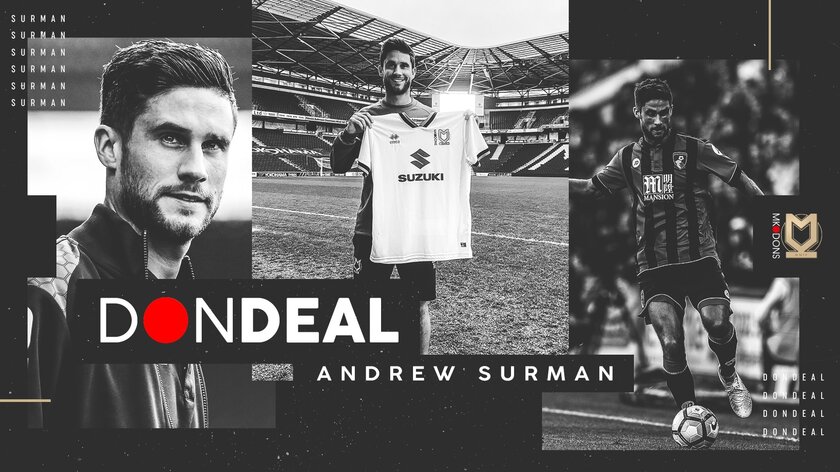 The South African born former England Under-21 international arrives at Stadium MK on a short-term contract and brings with him a wealth of experience at all levels of the game, with 461 total professional appearances to his name.

Among those includes 144 Premier League matches for the likes of AFC Bournemouth, Wolverhampton Wanderers and Norwich City, with the majority of those coming over the past five seasons with Bournemouth before the Cherries suffered relegation to the Championship this past summer.

Surman joins a midfield group that includes the likes of Scott Fraser, David Kasumu, Jordan Houghton and Louis Thompson - with the 34-year-old capable of playing anywhere in the centre of midfield as well as out on either flank.

Speaking to the Dons' official website, Surman commented: "I’m delighted to be here and I’m grateful for the opportunity."

"I know Russ from our time at Norwich together and I know what sort of football he wants to play. It’s a brand of football that is all I’ve known for the past six years that I’ve been at Bournemouth – it’s something that suits my game."

He added: "I’m hoping I can come in and add something to that. I’m a player that wants to get on the ball and keep it moving, and I look to impose my technical ability on every match I play. By the looks of it, I’ve come to the right place to do that."

Speaking of his latest addition to the team, manager Russell Martin commented: "It’s an incredible singing, he was a captain of a Premier League team last season."

"He’s going to add a huge amount on and off the pitch, we’ve talked about the importance of having experience and people who have been there and done it, and suit our style – he’s exactly that."

He continued: "It’s another player I’ve played with, but hopefully, people can see we don’t just bring in anyone."

"The biggest reference for me is the fact I’ve spent time in the dressing room with these players and spent time on the pitch with them."

"He’s one of the best footballers I’ve played with and he’s only got better with age.

He added: "He’s played for a team that like to play good football so he really does suit us. He’ll help the younger players as he’s a really good professional."

"He’s kept himself in really good shape and has been training all the way through lockdown – now we need to get him match fit."

He concluded: "Adding Andrew Surman is a huge boost for us all, he’ll come in and get himself fit as quickly as possible and add a huge amount to the squad."

Subject to international clearance, Surman could be in line to make his debut for the Milton Keynes this Saturday when high-flying Hull City travel to Stadium MK.