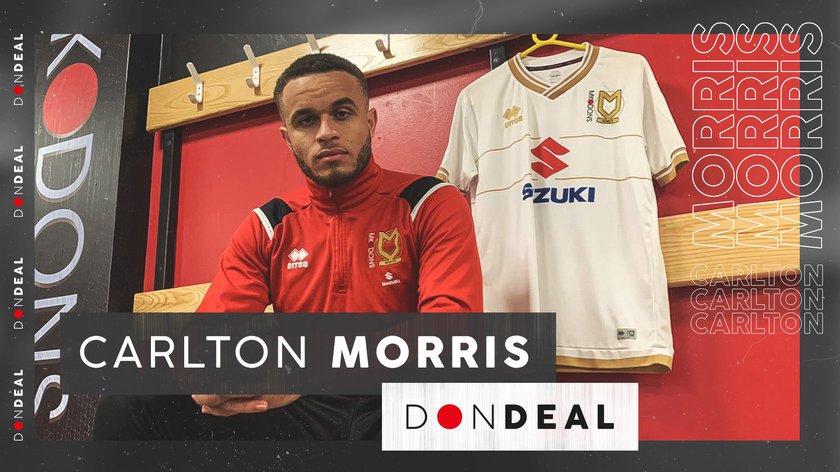 Russell Martin has made his first signing as manager of MK Dons, bringing in striker Carlton Morris on loan from Premier League club Norwich City.

Morris, 24, joins the Dons for the remainder of the 2019/20 season, having spent the first half on loan to Rotherham United.

During his spell with the Millers, Morris scored three goals and had a further four assists in 21 appearances in League One. In 28 total appearances this season, Morris has played a part in ten goals, with four of his own and six total assists.

The Cambridge native and former England Under-19 international has been on the books of his parent club Norwich since the age of 11, but has spent the majority of his professional career out on loan, with Hamilton Academical and Shrewsbury Town clubs he has spent time with.

Speaking of his move to the club, Morris commented: "I’m over the moon, there were a few clubs interested in me but this was the most attractive option for me for various reasons - the team plays an attractive brand of football under the new manager and I know a few people here too."

He further explained: "Me and Russ have been close for years. He was very helpful to me as a young pro coming through at Norwich. I’ve always appreciated that and now I have the opportunity to work under him – it was an opportunity I didn’t want to pass up on."

"The team has gone to strength to strength with some good results recently and I think this is a good place to be. I can’t wait to get going and getting my teeth stuck into the big games we’ve got coming up and hopefully I can help the team have a successful end to the season."

Boss Martin, speaking of his first-ever signing as a manger, commented: "I’ve known Carlton for a while, having been with him at Norwich City."

"He’s a real athlete and he gives us another option at the top end of the pitch, as he can be a focal point for us to play off. He’s also a player who knows this league, having done really well here for Shrewsbury Town and, this season, with Rotherham United."

"I’ve spoken often about bringing in the right character and Carlton certainly fits that bill. There are not many bigger characters than him that I’ve come across, especially at his age. I’m not only pleased about what we’re adding on the pitch, but off it as well."