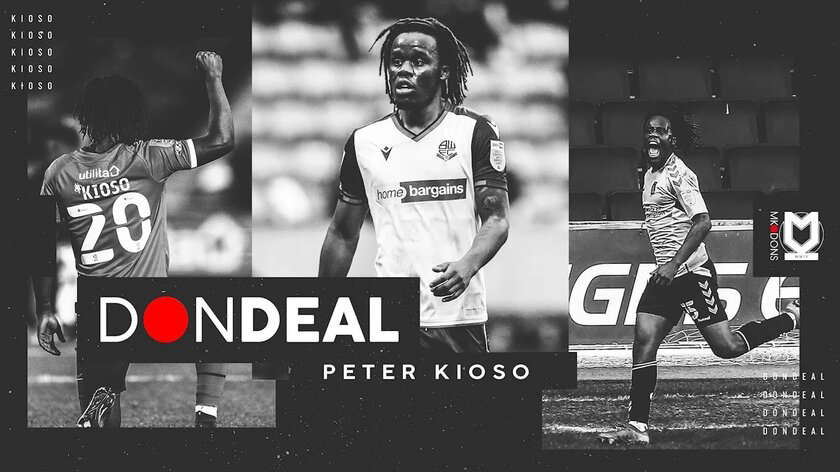 Milton Keynes Dons have announced the loan signing of right back Peter Kioso from Luton Town, ahead of their Papa John's Trophy match against Burton Albion.

With the 11pm transfer deadline fast approaching, and the Dons in action at the Pirelli Stadium this evening, the club have locked up a season-long loan deal for a player that began his playing career with the Milton Keynes club's youth academy.

The Irish defender began his professional career with Dunstable Town before a two-year spell with Hartlepool United, where he featured in 67 National League matches before earning himself a move to Luton Town prior to last season.

During the 2020/21 campaign, Kioso had loan spells with League Two club Bolton Wanderers, where he played in14 matches and scored three goals, as well as with League One club Northampton Town, where he registered a further three goals in 20 matches.

Kioso has made four appearances for the Hatters this season, three in the Championship and once in the Carabao Cup, and will now have an opportunity to earn regular first-team minutes with Liam Manning's side.

Speaking of his return to the Dons, Kioso said: "It’s great to be back. I’ve always kept tabs on the Club and it feels like it was written in the stars for me to come back at some point."

"I remember watching games at Stadium MK as a youth team player and seeing the likes of Dele Alli and George Baldock. I can’t wait to come back and play on this great pitch and in front of the MK Dons supporters."

"I’ve had some good conversations with the Gaffer and he is one of the main reasons why I decided to come back to MK Dons. Once I spoke to him and I knew his plans for me and the team, it felt like the right thing to do."

He added: "I am very excited to get going once again and I’m determined to work hard and do what I can to help the Club achieve something this season."

Head Coach Liam Manning said of his new arrival: "We are delighted that Peter has agreed to join us for the season."

"He compliments our squad due to is character and drive to get better while he can also play in a few positions which is a real strength of his. His history with the Club and the fact that he is from the area are both huge positives as well."

Sporting Director Liam Sweeting added: "We’re really pleased to be able to welcome Peter Kioso back to the Club."

"When sitting down with Liam to discuss who we would like to bring in before the deadline, Peter quickly became our number one target so we are delighted to get this deal over the line before 11pm."

He concluded: "He’s obviously somebody we know really well from his time in our Academy. We have all been impressed by how he’s bounced back to establish himself in the EFL, and his qualities and versatility will be a real addition to us at Stadium MK."