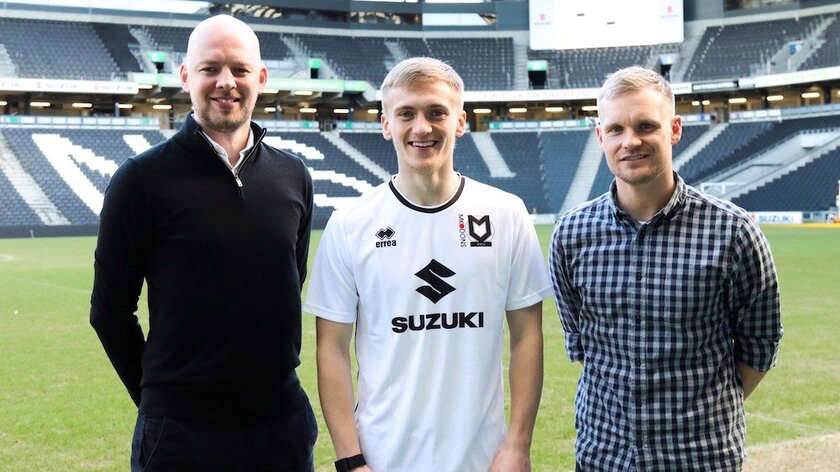 Milton Keynes Dons have announced the signing of midfielder Matt Smith from Manchester City for an undisclosed fee.

The 22-year-old Welsh international arrives at Stadium MK on a permanent deal from the Premier League club and brings with him experience both in England and in the Netherlands.

Born in Redditch, Worcestershire, Smith was on the books at West Bromwich Albion before joining the City youth academy at the age of 14. Since 2018, he has had spells with a number of clubs on loan - with the most fruitful coming with FC Twente and Doncaster Rovers.

During the 2018/19 season, Smith helped the Dutch club to the Eerste Divisie title while featuring in 37 total matches, scoring two goals and providing two assists while predominantly sitting in a deep lying midfield role.

A few appearances for QPR and Charlton Athletic in the Championship followed before Smith made 43 appearances for fellow League One club Doncaster, scoring once and providing seven assists - leading the side to 14th in the standings, just one place behind the Dons.

This season, Smith has had a bit-part role in the Championship with Hull City and moves to the Dons in search of regular first-team football, with the departures of Matt O'Riley and Ethan Robson likely to help facilitate that.

Capped 15 times for the Wales national team, Smith already has an international pedigree that should see him make an immediate impact at Stadium MK, and the club are delighted to have landed a player of his quality of transfer deadline day.

Speaking of joining the Dons, Smith commented: "I’m absolutely delighted to be here and I can’t wait to get going."

"It was time for me to move on away from City and I don’t think I could have found a better Club to join. The facilities here are fantastic and the players and staff seem fantastic too. There is a real project going on here and I wanted to be a part of that."

"We’ve got a quality squad who have done really well this season – hopefully I can add to that and help the team achieve its goals."

Sporting Director Liam Sweeting said: "We have admired Matt from a far for a long time, with our recruitment team exploring opportunities to sign him on several occasions."

"Matt has excellent pedigree having been signed by Man City at a young age and has developed into a senior Wales International. He will bring control, creativity and a strong understanding of the way we want the team to function."

"The deal has aligned perfectly this time to become a permanent move and is a great fit for both us as a club and where Matt is with his career. He has committed to us for the long term, and I look forward to working with him on this next chapter."

Head Coach Liam Manning added: "We are very excited to have Matt on board. He is well suited to the way we like to play football, given his upbringing at Manchester City, and is a full Wales international which just highlights the quality he possesses."

"He certainly bolsters our midfield and, I’m sure, he will have a terrific impact between now and the end of the season and beyond that too."