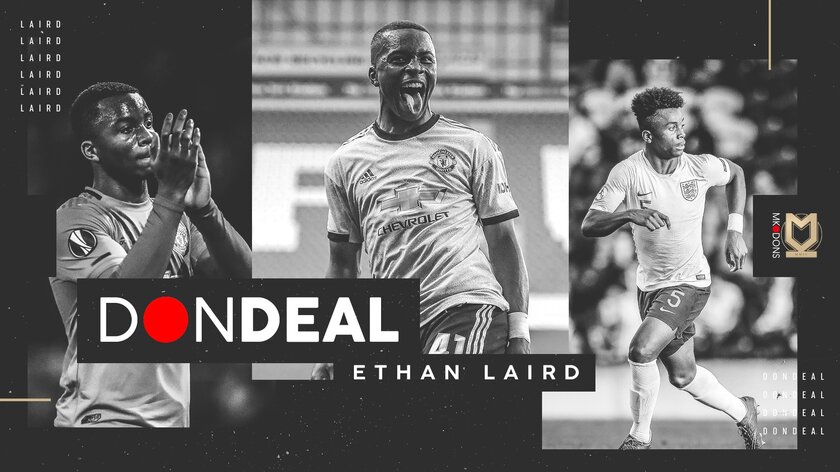 Laird, aged just 19, joins the Dons until the end of the season and is capable of playing anywhere along the defensive line, though he is predominantly utilised out on the right side.

The England Under-19 international is in a similar position to fellow Dons loanee Warren O'Hora, who is enjoying his first spell at the professional level.

Laird has been a prominent feature for the Manchester United Under-23s squad and even featured in two Europa League matches for the first-team last season, also making four appearances in the EFL Trophy across this season and last.

The Dons needed to address their defence this transfer window, especially with the departure of Baily Cargill to Forest Green Rovers yesterday.

The promising youngster, who has been a part of the Manchester United youth setup since the age of 8, will likely be used in a rotation with the likes of Regan Poole and Matthew Sorinola on the right side, while sometimes moving inside to provide cover for O'Hora and George Williams.

Speaking of his move to the Dons, Laird commented: “I'm buzzing to get started."

“The manager has shown a lot of faith in me and what I can do for the team, and that’s all I could ask for - it’s now up to me show why he was right to choose me.

He added: "I need to work my way into the team and get to know the lads, but I want to make as much of an impact as I can while I’m here. That’s something I’ll always hold myself too - how can I affect my teammates and the Club in a positive way."

"This is the perfect place for me to continue developing, with the way the team play. They are aggressive, they like to get in behind and they leave it all out on the pitch and that's my idea of football."

"I believe in the manager’s idea of the way we play and I want to make sure that I can help make that happen. I know we can achieve good things if we stick to the manager's beliefs and implement them on the pitch."

He concluded: "In terms of who I am - I'm quick, I like to dribble with the ball and I'm always looking to get in behind and put in crosses. I have bundles of energy and I'll be looking to put that to good use!"

Speaking of his newest addition, manager Russell Martin commented: "Ethan is someone with real quality and we’re really pleased to be able to bring him in. He’s chosen to come here over a number of options, which is brilliant for us."

"He’s very explosive but with lots of quality on the ball and he can play in a couple of positions in defence or further forward, which gives us some more versatility."

He concluded: "He’s really highly thought of at Man United and we are very grateful to them for allowing us the opportunity to work with him. We’re looking forward to that opportunity and hopefully, he’ll come in and add something to the group."