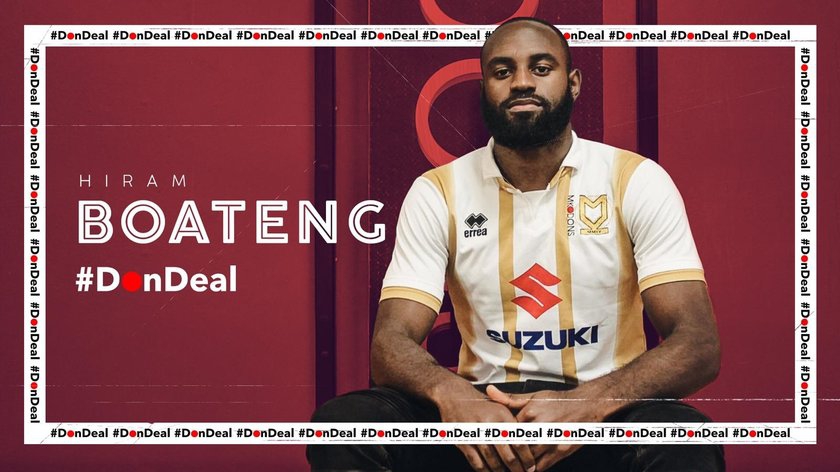 Milton Keynes Dons manager Paul Tisdale has kicked off his summer recruitment with the signing of defensive midfielder Hiram Boateng.

Boateng joins the Dons after spending the past two seasons with Exeter City. He re-joins manager Tisdale, who originally signed him for the Grecians from Crystal Palace in August 2017.

The defensive midfielder is an under-24 free agent, meaning that Exeter are due compensation - something that the Dons are currently in the process of negotiating with the Devonshire club.

Having progressed through Crystal Palace's youth setup, Boateng featured once in the Premier League for the London club, though the majority of his professional appearances have come in the fourth tier - with brief loans with Crawley Town, Bristol Rovers and Northampton Town in League One also.

With Mali international Ouss Cisse departing the club, it was imperative that Tisdale bolstered his midfield ranks - providing players such as Jordan Houghton and Connor McGrandles with some additional competition in the middle of the pitch.

Despite playing a traditional holding midfielder role, Boateng is more than capable of contributing offensively - scoring a goal and adding a further seven assists during his 27 league appearances with Exeter City this past season, the same totals he had in 38 games the previous campaign.

Speaking of his decision to join the club to iFollow MK Dons, Boateng commented: "I’m really excited to be here, I think this is a great place for me to come and play my football."

He added: "It’s going to be a new challenge, playing in League One, but I feel I have what it takes to step up. I feel I’m ready to show what I’m capable at this level."

"It’s going to be good coming into a positive environment. I’m here to help push the Club in the right direction of where we want to go."

He concluded: "As long as we get our heads down, play well and stay together, hopefully, we can carry on being successful."