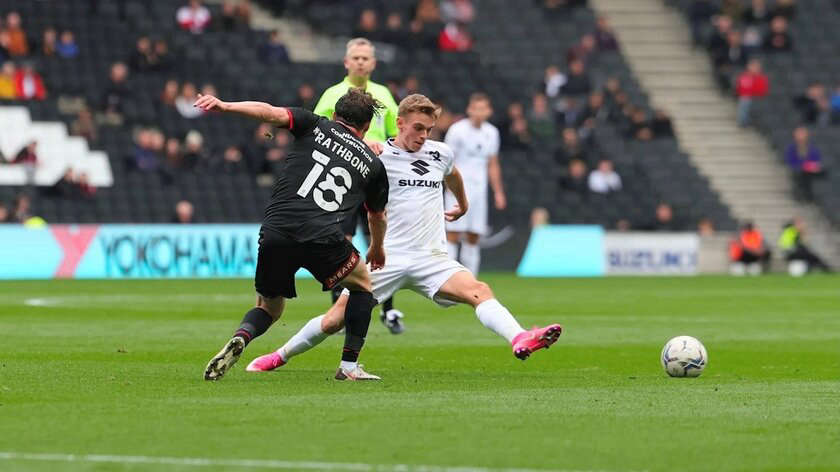 25 days had passed since the last home league fixture for the Dons, a 3-3 draw against Fleetwood Town, and it was an afternoon to forget.

The visitors started the match on the front foot, retaining the majority of possession and even seeing a half-chance bounce off the cross bar less than five minutes in.

The Dons began to settle into the match and Peter Kioso, fresh from receiving treatment moments earlier, zipped a pass  across the face of goal, needing just the lightest of touches to change the shape of the game early on.

Rotherham continued to press hard throughout the opening 15 minutes of the match, stealing away possession from the Dons after putting David Kasumu under pressure around midfield.

Some neat footwork allowed the visitors to get the ball out to Ben Wiles, who has plenty of space to angle a shot towards the top corner, seeing the ball narrowly sail wide.

The Dons had some of their own pressure thanks to a precise pass from Scott Twine found Zak Jules wide open down the left flank. The big defender managed to charge forward and whip a cross into the box, but was unable to reach the lurking Mo Eisa, seeing the effort cleared away from danger.

Eisa had a great opportunity moments later, receiving a pass deep in the Rotherham box and drawing goalkeeper Josh Vickers away from his position between the posts.

The striker couldn't quite find the right angle to get a shot away and the play resulted in the visitors regaining possession.

Scott Twine's trickery provided the Dons with a threatening free kick opportunity roughly 20 yards away from goal. Twine was the one to take the dead ball, but his looping effort curled narrowly wide to Vickers' right-hand side.

Moments later and the home side found themselves a goal down. A curling ball deep into the Dons box for a rising Michael Ihiekwe, who put a perfect header onto it - sending the ball looping over Andrew Fisher and into the back of the net in the 28th minute of play.

A period of scrappy play from both sides followed, with tackles flying in from all angles, until Kasumu was able to send in a vicious effort that was narrowly deflected out for a corner - coming agonisingly close to putting the home side level.

The Dons had their best chance of pulling level in the first half with moments left in added time, with a free kick finding Harry Darling deep inside the box.

Darling couldn't guide his header towards goal, finding Twine to the side. The midfielder sent the ball back across the box, picking out a leaping Jules, who connected but sent the ball sailing over the crossbar from close range.

The referee's whistle blew moments later, sending the two sides in with the Millers retaining their 1-0 lead.

The second half started brighter for the Dons, who looked to create something early, but it quickly led to a nervy moment when Kioso tried to clear the ball away, ending up in the hands of Andrew Fisher.

The Rotherham players were unhappy with the referee's decision not to award a pass back free kick, but he would not listen to their pleas on the matter.

The Dons had a free kick opportunity after Twine was pulled down near the edge of the Rotherham box. The Dons' dead ball specialist whipped in a clean ball but sent it directly into the smothering arms of Vickers, never truly testing the goalkeeper.

The Dons could not build on the positives, though, as Michael Smith scored scored the visitors' second of the match directly from a corner, surprising all players inside the box, including Fisher, who saw it slip past and hit the far corner.

It went from bad to worse for the home side as substitute Freddie Lapado put the Millers 3-0 up with just under 20 minutes remaining, picking up a low pass deep inside the box and launching a shot at the goal with acres of space around him.

The home side tried to find ways to get into the Rotherham box, but often looked to make a pass when a shot was needed, with O'Riley getting one of the few shots on target for the Dons with less than five minutes remaining.

Liam Manning's side had no answers for Rotherham, however, failing to get on the scoreboard after almost 100 combined minutes of play (including added time) and will have to forget this one quickly with a trip to Crewe Alexandra their next fixture in league play.

Before then, Aston Villa Under 21s will be the visitors to Stadium MK on Tuesday night for the Papa John's Trophy.