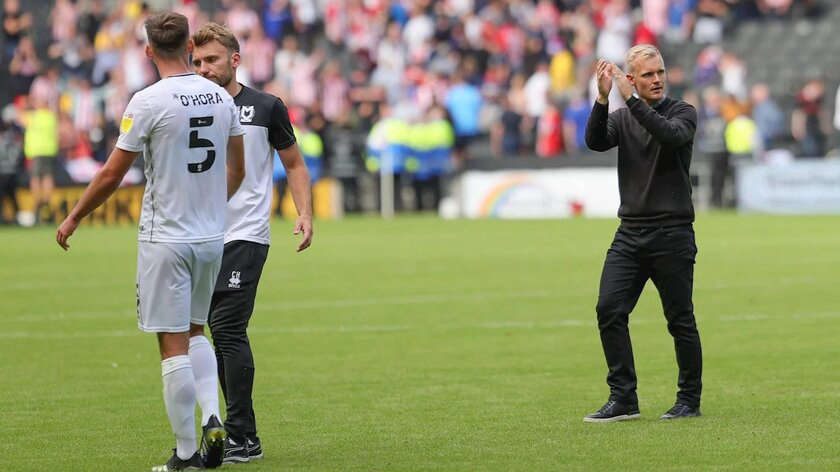 Milton Keynes Dons' hopes of claiming an automatic promotion place are still alive ahead of the final day of the season.

The Dons travel to Home Park on Saturday (30th April) to take on playoff-chasers Plymouth Argyle in their final fixture of the 2021/22 campaign, and still have the chance to jump into second place by the time the full whistle is blown.

All eyes were on last night's League One fixtures as both Wigan Athletic and Rotherham United, who currently occupy the top two places in the table, played out their final game in hand - with both having the potential to effectively decide the final standings before Match 46 rolled around.

Wigan, taking on ninth-placed Portsmouth at Fratton Park, were stunned by a 3-2 defeat after entering the half-time break 2-0 ahead, with a George Hirst brace and Aiden O'Brien's winner in the 87th minute sending the Latics home still needing a result at the weekend to secure the title.

Rotherham, who were tied on points with the third-placed Dons prior to last night's tilt with Sunderland, were denied essentially claiming the final automatic promotion place after a late own goal saw them squander the 1-0 lead they had held from the 17th minute of the match.

This sets up what is expected to be a truly exciting final game of the season, with any of the top three still having a chance to claim one of the two automatic promotion places - with a slim opportunity to even see a shock at the very top.

The Dons face a Plymouth side sitting just inside the playoff places, and will need a victory to have any hopes of jumping into at least second place. Should Liam Manning's side pick up a win, and Rotherham get anything less against survival chasers Gillingham, then the Dons will leapfrog them.

Wigan Athletic's title hopes could also be under threat from both the Dons and Rotherham should they fail to win against Shrewsbury. Rotherham sit just two points behind, and could snatch the title with a win if Wigan only draw due to goal difference implications.

With regards to the Dons, there is the slimmest of chances that they could be surprise champions by end of play - should Wigan and Rotherham both lose and the Milton Keynes club overcome a six-goal difference.

All hypothetical situations are possible, making the Dons' trip down to Plymouth all that more exciting. If they can take care of their business, it will be down to other results to determine whether or not Manning and his backroom staff will have achieved something unthinkable given the circumstances around the start of the 2021/22 season.

The year has been full of ups and downs, but it has been one of superb growth for the team and whether or not automatic promotion is secured or the playoffs await, it will be one that fans remember for a long time.