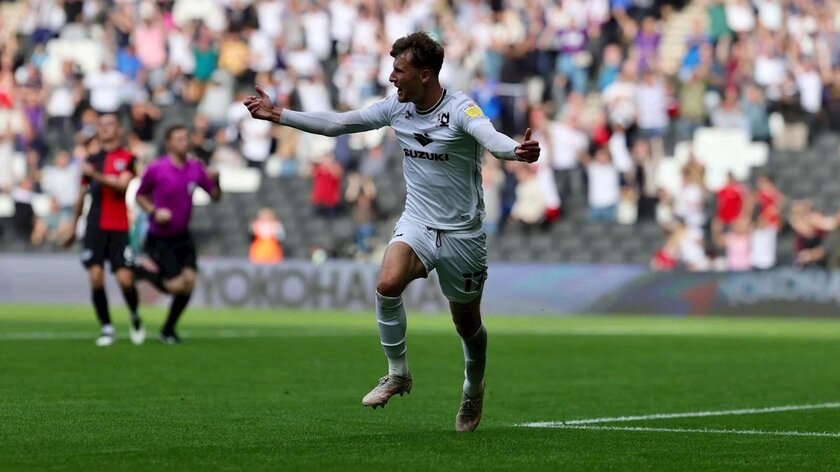 Milton Keynes Dons extended their unbeaten run to five matches in a row after picking up a 1-0 victory over visitors Portsmouth at Stadium MK.

The match saw two teams that had both made positive starts to the new season look to further add to their solid points tallies, while also playing host to yet another milestone in the storied career of Dons legend Dean Lewington.

The club captain, and all-time legend, hit 700 league appearances for the Dons - an achievement earned by very few, even fewer with just a single club.

It also saw the Dons hand Hiram Boateng his first start for the club since December 2019, with Lewington himself having had a key role in the midfielder's return to the fore since the departure of Russell Martin.

The Dons started the match brightly, getting the ball forward and almost having the perfect opportunity to open the scoring when an Andrew Fisher clearance ended up in the path of Scott Twine deep into Portsmouth's half.

The clearance fell to opposite goalkeeper Gavin Bazunu, who stumbled and gave the ball away to Twine with a wide open goal just yards away.

The Dons midfielder was unable to get into an ideal shooting position on that occasion, but came close to having another opportunity when a long ball over the top almost fell at his feet with nothing but Bazunu to beat.

A last ditch header, however, stifled his opportunity and the visitors continued to fight for possession in the early stages.

Parrott gave Pompey a scare just shy of the ten-minute mark, with Tennai Watson placing a perfect pass into his feet inside the penalty area, with the Republic of Ireland international zipping a strong shot just over the bar.

The Dons were given their own scare a third of the way through the first half when a cross sent deep into their penalty found Reeco Hackett-Fairchild, who headed the ball downwards and narrowly over Fisher's crossbar.

Hiram Boateng came close to opening the scoring right on the half-hour mark with a superb solo effort, gliding across the pitch and weaving through the opposition defence.

He lost the ball, briefly, before reclaiming it and launching a rocket shot low, with Bazunu well beaten. Had it not been for the post, the Dons would have taken the lead in the most spectacular of ways.

After a couple more promising chances, Parrott had arguably the second best effort of the first half after taking a well-timed pass from Twine and seeing his lifted shot only narrowly palmed away by Bazunu.

Bazunu was on hand once again to deny the Dons an opening goal, pushing away a dipping Twine effort from the edge of the box, seeing the ball knocked away from the top corner of his goal with less than five minutes until the half-time break.

The two sides entered the break with the score tied at 0-0, with Bazunu ensuring the visitors remained firmly in a game that the Dons looked to be enjoying the majority of opportunities in.

The two sides came out from the second half fairly evenly, with Portsmouth earning an early corner and the Dons getting forward with Daniel Harvie trying to find Boateng on the edge of the box - neither side truly threatening in the first five minutes of resumed play.

The Dons began to grow in the match, with more pressure being put on the Portsmouth defenders, with the frustration of being unable to get on the score sheet showing when Parrott was booked for angrily kicking the ball into the crowd after being called for offside.

Fisher was called into action near the hour mark when Portsmouth were able to break down the right flank, with Marquis getting a low-driven shot on target and forcing the Dons goalkeeper down to the ground to keep his side level.

The Dons goalkeeper was once again needed when Ronan Curtis was free in on goal on the left flank, seeing Fisher get a stronger hand to his close-range effort and keep the reinvigorated visitors at bay.

A superb effort from Parrott allowed the Dons to break freely and open the scoring in the 72nd minute. The striker collected the ball after a clearance from a Portsmouth corner, fending off a couple of the visitors before launching a pass across the pitch to a wide open Scott Twine.

Twine barrelled forward down the left flank and towards goal before slotting a neat pass across to Ethan Robson, who tapped the ball in beyond Bazunu to the rapturous cheers of the home crowd.

Parrott could have doubled the Dons' lead after receiving a superb pass from Harry Darling down the right flank, taking the ball into the Portsmouth area before becoming tangled up - getting a tame effort off that rolled past Bazunu's far post.

Twine and Parrott linked up again with less than five minutes remaining in regulation, with the latter picking out the former with a neat ball from a wide position - but Twine's effort inside the box rolled away from danger.

Five minutes of stoppage time were added onto the match, with the Dons doing their best to retain possession and keep the visitors hemmed in their own half for as long as possible.

Their efforts were unable to prevent Portsmouth from causing headaches, with the visitors able to get a threatening cross deep into the Dons' box - forcing Fisher to claim the ball out of the air with just a minute remaining in added time.

The Dons held firm, however, and were able to see things out - claiming 12 points from their opening seven matches this season and keeping their impressive run under head coach Liam Manning going, with 11 of their points coming in their past five consecutive matches.

The result elevates the Dons up into fifth place in the League One standings, a position they would hope to be in by season's end if the positive results can be maintained throughout the year.

A win against Portsmouth is a strong result for the club, with the visitors another side that would be hoping to be in and around the promotion places come May - showing what they can achieve even against top opposition.