MK Dons hold on to claim a point against Plymouth Argyle 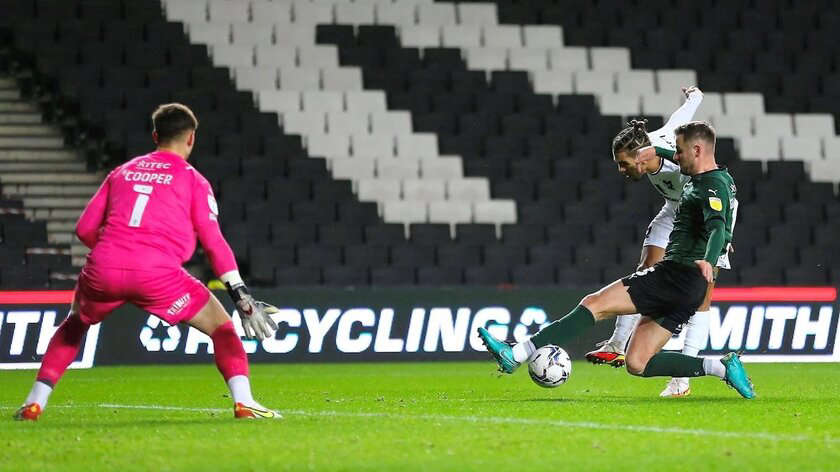 The two sides shared a point apiece in front of the Sky Sports TV cameras, with the Dons giving up their early lead and enduring a strong flurry of chances from the visitors.

The Dons started the match brightly, with Scott Twine working the ball into the box and picking out lone striker Mo Eisa - with the heavy Argyle defensive pressure ensuring the home side could not get early shots towards goal.

Liam Manning's side registered their first shot on goal in the 20th minute of play, with Eisa beating his man to collect the ball in the box. The tame effort was saved low by goalkeeper Mike Cooper.

Cooper was unable to prevent the home side from taking the lead less than a minute later when Tennai Watson, with Eisa running alongside him in support, netted low after receiving a similar pass to his teammate.

Almost immediately after the restart, Andrew Fisher was called into making a superb diving save after an effort from Conor Grant on the edge of the box.

Harry Darling made a strong run along the right flank for the Dons, linking up well with Tennai Watson after driving out of danger in his own half.

The two sides battled end-to-end for spells, with the Dons arguably looking the more threatening, but nothing could separate either team - with Watson's goal the only score of the first half.

The Dons were forced into making a change for the second half, with Darling replaced by Aden Baldwin after appearing to suffer an injury during his earlier run towards the end of the first.

Manning's side continued to press Plymouth deep in their own half, stifling the visitors' attempts to get the ball forward.

A sudden break down the left, however, put the Dons under pressure and forced Josh McEachran into giving the visitors a corner - with Fisher spilling his initial claim deep in the bo before recovering quickly.

The move buoyed Plymouth, who broke through the middle with former Dons midfielder Jordan Houghton, forcing Fisher into making another claim on a high looping pass into the box.

The reinvigorated visitors struck in the 66th minute, with substitute Danny Mayor breaking down the left flank and sending the ball deep into the Dons box - with the ball moved between a few Plymouth players before Conor Grant struck home from the centre of the penalty area.

The Dons almost immediately put themselves back ahead through substitute Troy Parrott, who sent in a lobbed effort over Cooper and struck the underside of the crossbar.

Plymouth were firmly on the front foot with 15 minutes remaining in the match, continually pressing deeper into the Dons' half and sending the ball into the box on numerous occasions.

Manning's side managed to fight back and almost pick out the outstretched boot of Eisa deep in the box, while moments later Parrott laid a pass back to Eisa who got a side-footed effort in on goal - with the home side trying everything to find a way to regain their earlier lead.

Daniel Harvie then had an effort on his right foot from just inside the box, but the ball was sent wide of Cooper's far post.

The Dons themselves were saved by the post as a long range effort from the Jordan Garrick bounced off the bar as regulation time expired.

The visitors continued to press in stoppage time as Danny Mayor struck a low shot at the edge of the box, hitting a crowd of white shirts in the box before seeing it cleared away.

The Dons will feel as if they could have taken more from the match, with plenty of positive chances, but will be glad to have survived the late drive from the visitors to keep themselves firmly in the playoff picture.

A quick turnaround sees former boss Karl Robinson and Oxford United travel to Stadium MK, with little time for Manning and Co to dwell on what could have been on a cold Wednesday night in Milton Keynes.