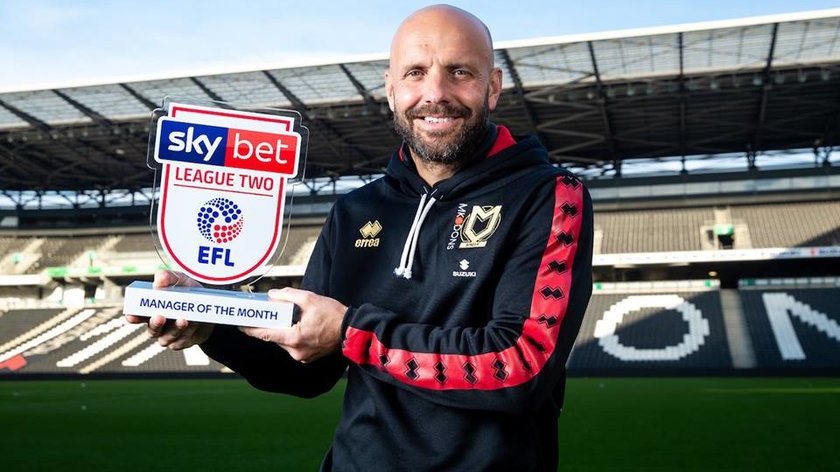 The award comes after Tisdale led his side through an incredible run, earning 16 out of a possible 18 points during the past month of the season.

That accomplishment has seen the Dons climb the league table, where they now sit in second place - just two points behind Lincoln City.

Tisdale’s team has jelled well this season and look on course to challenge for automatic promotion, with the Milton Keynes club losing just one game so far in League Two.

In the month of October, the Dons conceded just two goals whilst netting ten of their own in the league.

They started the month with four consecutive clean sheets and, during that time, the boys from MK1 picked up a strong 3-0 victory over Cheltenham at Stadium MK as well as a hard-fought 1-0 win over local rivals Northampton Town.

This is the second time that Tisdale has won a Manager of the Month award, with the first coming in August 2017 – during his last season in charge of Exeter City.

Tisdale now has two nominations for the award since joining the Dons this season, with the 45-year-old claiming the honour at the second time of asking.

Speaking at a press conference ahead of the team’s trip to Grimsby Town, Tisdale commented on his nomination.

He says: "I'm very pleased because it was a reflection of our performances and our results so it suggests it has been a good month."

"I’m really pleased with that, it says a lot about the team I have behind the team, the work we've done at this early stage of the season, and the way the players have responded.”

He adds: “It's always nice to be nominated because it always means you had a good month of results, and we have.”

Tisdale's MK Dons side have started November off in storming fashion, earning a 4-0 victory away to Crawley Town last Saturday.

They will now be looking to maintain their recent excellent form and hopefully help their manager earn even more recognition throughout the season.

With the team growing in confidence and fighting for every point, this accolade is a just reward for a manager that came to the club with high expectations – with fans undoubtedly delighted with how quickly things have changed for the better under his stewardship.