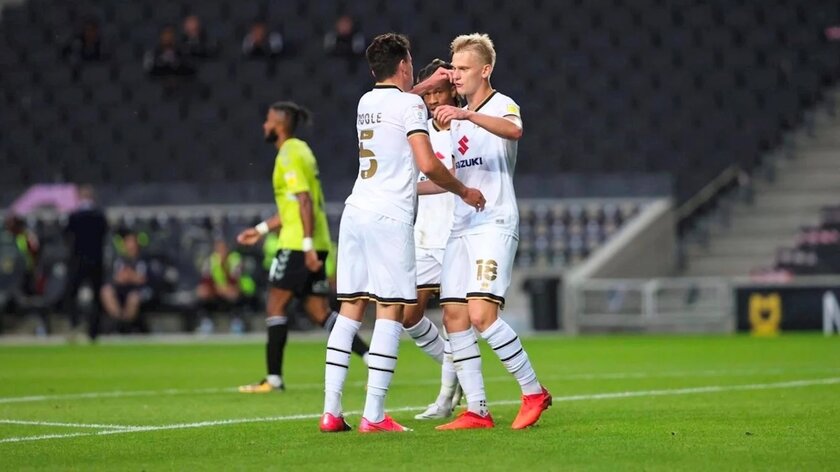 Milton Keynes Dons overcame an early deficit to claim a 3-1 victory at home against local rivals Northampton Town in the first match of the EFL Trophy.

Dons boss Russell Martin made four changes to his starting eleven from the team that faced Coventry City in the Carabao Cup last Saturday, with debuts handed to goalkeeper Laurie Walker and centre-back Warren O'Hora.

The Dons started the game on the offensive, with Matthew Sorinola taking the ball down the left flank and sending a cross into the box searching for Joe Mason, which was caught and held by Jonathan Mitchell.

Northampton answered almost immediately, with Harry Smith beating Dean Lewington in a foot race towards the box, with Walker coming forward and getting a crucial block in early.

A strong shot from outside the box was dealt with by Mitchell ten minutes into the game, with Sam Nombe attempting to head the ball across the penalty area, only to see Northampton shirts surround and clear it.

It was Northampton, however, that opened the scoring with Joseph Mills striking a perfect left-foot volley, sending the ball across Walker's goal and into the far bottom corner.

David Kasumu attempted to bring his team level after a quarter of an hour, taking on a number of Northampton players solo before getting off a strong shot from just outside the penalty area, but it was saved once again by Mitchell.

The Dons eventually brought things level after the half an hour mark, with Lasse Sorensen's precise pass finding Joe Mason to set up Sorinola, whose cross through the box was collected by Poole, who turned and struck low, sending his shot into Mitchell's far corner.

The goal livened to Dons up, with Baily Cargill's acrobatic shot narrowly going wide and a flurry of movement in the penalty area few minutes later seeing Cargill go close again, this time seeing his shot fly high above the bar.

Despite this flurry for positive chances for the Dons, the two sides entered the half tied at 1-1. Northampton, however, were forced into two substitutions due to knocks, with both Harry Smith and goalscorer Joseph Mills being replaced by Chris Lines and Morgan Roberts.

The visitors returned for the second half with another substitution, with Luka Racic swapped for Joe Martin before the referee got play back underway.

The Dons started the second half the brighter of the two sides, pressuring the visitors in their own half with a number of chances, with Kasumu seeing a close-range shot go wide after some solid link-up play between Nombe and Poole.

Lass Sorensen, who was named Man of the Match in his debut against Coventry City, was once again a bright spark in this game, creating plenty of opportunities for his teammates but also for himself.

Just shy of the hour mark, Sorensen took the ball on through the middle of the pitch, dribbling past Northampton players around him and having a shot on the edge of the box, though Mitchell was on hand to make a comfortable save.

Walker, making his first appearance for the Dons first-team after being released after his time in the academy came to an end over 11 years ago, made a heroic save mid-way through the second half, diving low and even showing the determination to keep the visitors out by putting himself in front of a follow-up shot from close range even after the referee had blown his whistle for offside.

With just over a quarter of an hour remaining in the game and Nombe put the Dons ahead, collecting the ball in Northampton's penalty area and coolly slotting home a low shot beyond Mitchell and into the far corner.

It only took a couple more minutes for the Dons to extend their lead thanks to Sorinola's run into space and well-placed shot inside the box rising beyond Mitchell's reach.

John Freeman, played out of position in his debut against Coventry City, was involved in both Nombe and Sorinola's goals, showing great awareness to wait for Sorinola's run into space before making the pass.

The two-goal buffer didn't stop the Dons from adding more pressure in the offensive third, with a number of chances created, including a low-driven shot from Baily Cargill that was deflected out for a corner.

Northampton were unable to handle the sustained pressure and the loss of key players, with the Dons seeing out the rest of the match and securing all three points in their first EFL Trophy fixture of the 2020/21 season.