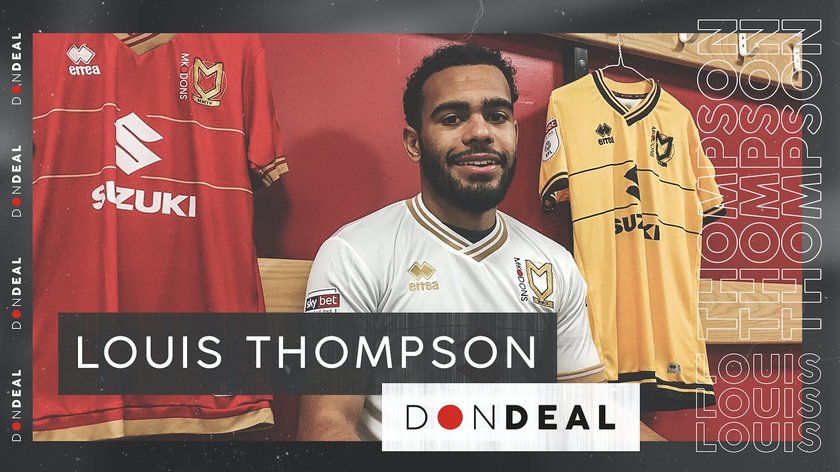 MK Dons have signed midfielder Louis Thompson on a loan deal until the end of the season, making him Russel Martin's third signing of the January window.

Thompson, 25, arrives at the Dons familiar with a number of people already at the club, having previously been managed by Luke Williams as well as having been a previous teammate of both Ryan Harley and Ben Gladwin.

The former Wales Under-21 international began his career at Swindon Town, becoming a first-team regular between 2011 and 2016. His emergence as a reliable central midfielder by the age of 20 saw him move to Norwich City in 2014 before subsequently returning to the Robins on loan for the following two seasons.

After struggling to break into the Canaries' first-team, especially with their promotion to the Premier League, Thompson had a brief loan spell with Shrewsbury Town earlier this season, before seeing his loan deal end.

Speaking of his arrival, Thompson said: "I’m delighted, the team are playing a great brand of football and I wanted to get down here and be a part of that. Hopefully, I can take to it like a duck to water and me and the team can kick on."

"I always knew Russ would go into coaching – it’s a natural progression for him. He’s a born leader and he was always very vocal and expressive as my captain and he always had a knack for saying the right things."

He added: "I’m a combative player who likes to get forward as well as read the game well defensively. I want to chip in at both ends of the pitch - hopefully, I can do that and help the team pick up the points needed to climb the table."

Speaking of his latest signing: "I’m delighted to get this one done. I know Louis has the right character and quality to really strengthen us both on and off the pitch – he is exactly the type of player that we want at the Club."

"He is another player who has shown real desire to come to MK Dons despite interest from other clubs, some in the Championship. A big thank you must also go to Neal Adams, Stuart Webber and Norwich City in allowing both Louis and Carlton Morris to come here."

He added: "If we manage Louis correctly and keep him fit then we have a top player on our hands – a player who earned a move to the Premier League from this level. I’m excited to have him on board."