MK Dons up to third after comeback victory over Lincoln City 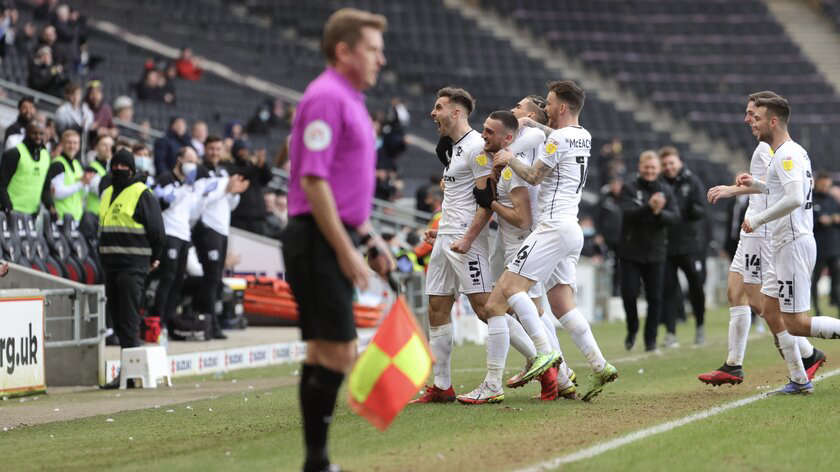 Milton Keynes Dons climbed up to third in the League One standings after a 2-1 comeback victory over Lincoln City at Stadium MK.

The Dons entered the home fixture on a strong run, with the second-best form in League One over their previous six games, and were looking to simply  maintain their position in fourth place in the standings ahead of the game.

After a period of even play to start the fixture, it was the visitors that opened the scoring early into the match, with recent signing John Marquis netting in the ninth minute.

The Dons appeared to be caught napping in defence as a ball sent across the pitch reached Scully inside the box with acres of space to move.

He cut a pass across the box for Marquis to comfortably tap home from close range, giving the visitors an early lead.

Liam Manning's side almost went 2-0 down moments later, close to mirroring their last outing against the visitors, as Warren O'Hora's attempt to head away an incoming cross struck his own side's crossbar.

The Dons struggled to break the visitors down through the first 20 minutes of play, but began to build up a head of steam and found themselves progressing into the final third with more confidence and purpose.

Josh McEachran looked certain to score with a well-placed shot on the edge of the Lincoln penalty area, sending goalkeeper Josh Griffiths diving to his left but seeing the ball narrowly go wide of the post.

Theo Corbeanu did well to take the ball on the left flank, cutting inside before picking out Troy Parrott lurking on the edge of the penalty area.

The Republic of Ireland international opted to pass rather than shoot and was intercepted, before Scott Twine won back possession and also won a free kick inside the Lincoln half - his effort comfortably landing in Griffiths' hands after taking a slight deflection.

The Dons pulled level just over five minutes before the half-time break, with Harry Darling heading the ball in from inside the six-yard box.

Corbeanu forced Griffith into making an awkward save after a strong, dipping effort from outside the box. The ball flew up into the air and was headed down by Darling and beyond the reach of the keeper.

After the goal, Lincoln made life difficult for the Dons as they continued to push forward and play at an increased tempo - including all set pieces.

The Dons struggled to set themselves and were almost caught out a couple of times before Parrott himself came close to causing the visitors a problem as he chased down a long ball over the top - seeing Griffiths use his body to clear the ball away just in time.

The half-time whistle came at the right time for the Dons, who needed to refocus and ready themselves mentally for another tough 45 minutes ahead.

The Dons started the second half firmly on the front foot and took the lead just two minutes after the break.

Tennai Watson began the passage of play with a neat through pass to Warren O'Hora, who carried the ball forward before picking out Parrott inside the box.

The striker turned on the ball and tapped it back into O'Hora's path, with the centre back able to get a strike in under pressure and send the ball beyond the reach of Griffiths - giving the home side a 2-1 lead to defend.

The second goal clearly buoyed the Dons, who continued to put far more pressure on the visitors than they did in the first half, with the attacking three of Twine, Parrott and Corbeanu all linking up well and trying to find a way to extend their lead.

Daniel Harvie forced Griffiths into making a tough diving save thanks to a strong header inside the box from a corner, with the Scotsman rising above everyone in the box to reach the ball.

Lincoln almost equalised when Scully struck the ball in behind the Dons defence, seeing his effort hit the upright and fly out for a goal kick.

In the dying minutes of the game, the visitors threw everything they had at the Dons, desperate to find an equaliser. But it wasn't to be as Liam Manning's men held firm and were able to see out the five minutes of added time to claim another three points.

The victory, along with Sunderland's 2-1 loss to Doncaster Rovers, means that the Dons climb up to third in the League One standings.

Up next for the Dons is a trip to Fleetwood Town before a return to Stadium MK next Saturday against Ipswich Town.