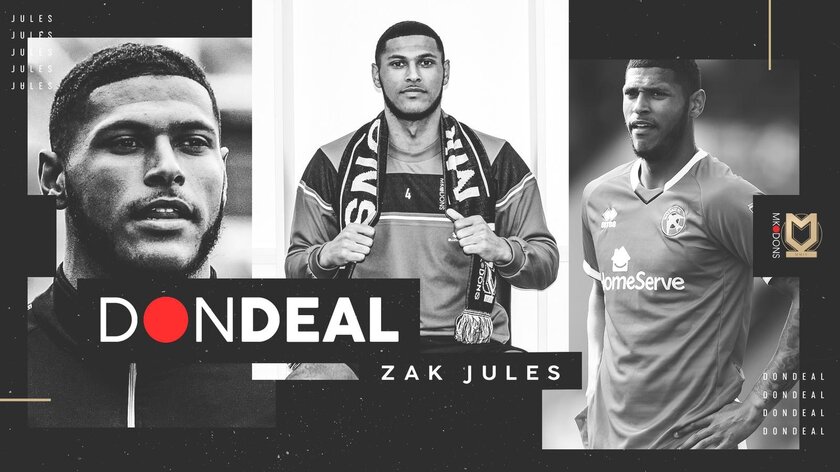 The Scotland Under-21 international joins the Milton Keynes club for an undisclosed fee from the Sadlers, having made 42 total appearances over the past season-and-a-half for the West Midlands club.

The Islington-born defender, who is comfortable playing in the centre of defence as well as at left back, progressed through the Reading youth system before making a number of loan appearances for clubs such as Hemel Hempstead, Braintree, Motherwell and Port Vale.

With the Dons seeing Richard Keogh, Regan Poole and George Williams leave this month, with Harry Darling and Warren O'Hora signing permanent deals with the club, manager Russell Martin was keen to add another body to provide depth and competition in his usual back three.

Speaking of his signing, Jules said: "I’m buzzing and glad to get it over the line, it’s been a hectic day but I’m happy to finally be an MK Dons player."

"As soon as I heard about it, it was a no brainer for me. This is a great opportunity for me at a great Football Club and, of course, in a team that plays the way that way we do."

"I’m quick, athletic and strong but I’m good with the ball too and comfortable playing out from the back, which you need when playing in a Russell Martin team – that’s why it’s the perfect fit for me."

On his new signing, manger Russell Martin commented: "We’re very excited to have Zak on board. He fits the profile of the player we want to bring to the Football Club and is certainly going to add our squad, both in the short term and the long term."

"He has had a lot of clubs interested in him and we’ve beaten a lot of clubs to his signature. He was desperate to come here, with the style of football that we play, and improve himself as a footballer, and help take us to where we want to get to."