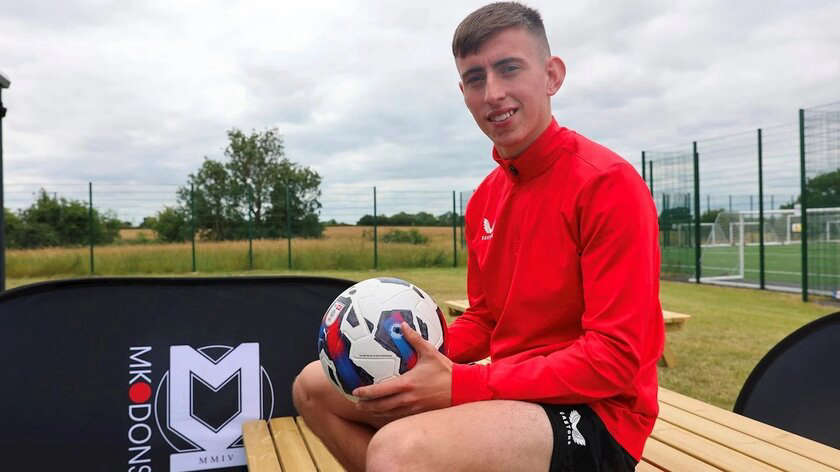 Rumours had been swirling over the past week, linking the Dons with the talented 19-year-old, with reports suggesting that head coach Liam Manning had watched Burns play for former club St. Patrick’s Athletic while the Dons were holding their pre-season training camp in the Republic of Ireland.

Now, Burns has signed a long-term deal with the Stadium MK club after the Dons paid an undisclosed fee for his services.

Used predominantly on the right side, the Republic of Ireland youth international has already racked 59 professional appearances for St. Patrick’s, scoring 11 goals and providing 13 assists since first breaking into the team in 2020.

Credited with an FAI Cup in 2021 and named St. Patrick’s Young Player of the Season, as well as claiming Goal of the Season for his strike against Dundalk, Burns arrives in Milton Keynes with an excellent opportunity to progress his career and contribute to the team's hunt for promotion.

Speaking of joining the Dons, Burns commented: "I’m absolutely delighted. It has been going on for a little while so to get it done now – I’m over the moon."

"I was excited as soon as I heard of the interest from MK Dons. I love Ireland and I’ve loved playing there but you have to challenge yourself in your career and this is a brilliant fit for me."

He concluded: "The Gaffer has asked me to come in, be myself and not change anything which is what I will be looking to do. I’ll be looking to get the ball at my feet and go at defenders – and hopefully get some goals and assists too!"

Sporting Director Liam Sweeting said: "I’m delighted to welcome Darragh to MK Dons and the exciting challenge of English football that awaits him."

"Darragh is someone we have tracked for over 18 months since his performances last season for St Pats and again this season as he continued to develop and deliver excellent performances in the League of Ireland. He has also been rewarded recently with a call up to the Republic of Ireland U21s."

"Darragh has chosen MK Dons as the perfect match for his next stage of development and we look forward to firstly helping him settle here and then challenging him to continue progressing with us."

He concluded: "I have been impressed with how eager he is to get going and we are pleased to welcome him and his family to Milton Keynes and the Dons."

Head Coach Liam Manning added: "Darragh is a player we have watched for some time, including on our recent visit to Ireland for pre-season, and we are pleased to have been able to bring him to the Football Club."

"This will be a big transition for him, moving to a new country and a new league, so it will likely take some time to settle but he has some fantastic qualities and we are all very excited by his potential."