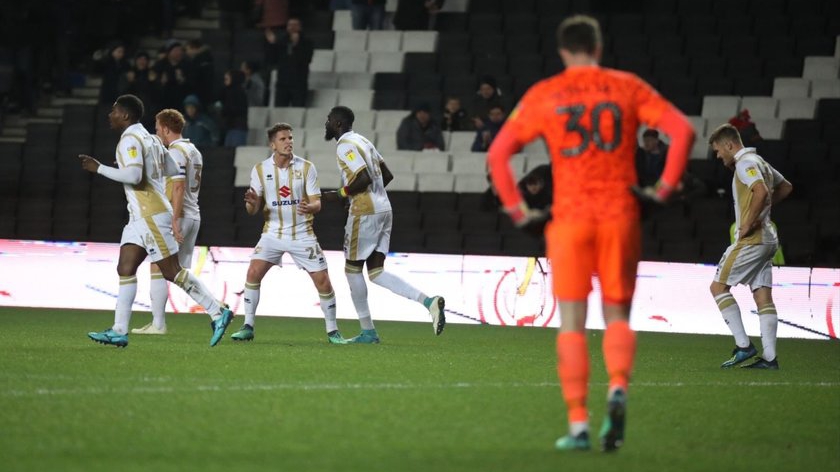 Two goals and yet another clean sheet ensured MK Dons claimed all three points against Carlisle United at Stadium MK.

Goals from Jordan Houghton and Kieran Agard in the second half of the game helped the Dons maintain their unbeaten run at home, keeping Paul Tisdale's team two points ahead at the top of the League Two standings.

The game saw the Dons forced into some tactical changes, with star striker Chuks Aneke and centre-back Jordan Moore-Taylor both sidelined with injuries suffered against Morecambe just over a week earlier.

The visitors registered the first shot on goal, but the Dons would ensure that chances were few and far between for the majority of the match.

Bailly Cargill attempted to take a shot early on in the game after receiving the ball from club captain Dean Lewington but was dispossessed, before turning provider for a Rhys Healy header that flew over the bar.

Despite having the majority of possession and chances for the opening half an hour of the game, it was the visitors that could have opened the scoring when Lee Nicholls was forced into a spectacular save - from which he needed to react quickly to cover the ball at the far post.

The two sides entered the half tied at 0-0, despite the Dons having the better of chances.

It took the home side just five minutes after the half to break the deadlock, with Houghton's effort from the edge of the box finding its way through the opposition defence before bouncing off the far-side post beyond Carlisle goalkeeper Adam Collin.

Fifteen minutes later and the Dons extended their lead thanks to Kieran Agard's 11th goal of the season.

Ousseynou Cisse picked the ball up close to the halfway line before slotting a perfect through ball to Dean Lewington, who was charging at full speed along the left side of the pitch.

Lewington's curling cross into the box was effortlessly tapped beyond Collins from Agard to rapturous applause from the home crowd.

The Cumbrians, now two goals down, began to pull back into the game with a number of chances - one forcing Nicholls into a perfectly timed diving save.

Late on in the game saw Peter Pawlett and Osman Sow brought on, with both players receiving warm welcomes from the Dons fans - with Sow having had a torrid time with injuries since first arriving at the club last summer.

The Dons held on and secured their 12th league win of the season, with second-placed Lincoln City sitting just two points behind Tisdale's side with a game in hand.