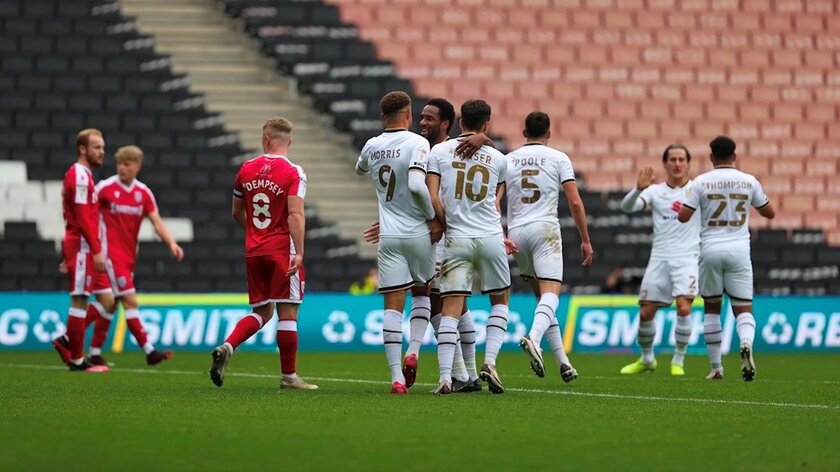 Milton Keynes Dons claimed all three points for the first time in the 2020/21 League One campaign with a convincing 2-0 win over Gillingham.

The Dons entered the game sat bottom of the League One table with just two draws from their first five matches this season, needing a win to get their 2020/21 campaign truly underway.

Cameron Jerome and Carlton Morris linked up early into the game for the home side, with the veteran striker crossing the ball into Gillingham's box for Morris to collect.

The on-loan Norwich City forward turned and flashed a shot but the ball flew well over the crossbar and out for a corner.

Jerome was involved again after ten minutes with a calmly placed shot from inside the box, which had followed cries from Regan Poole for a penalty after appearing to have been brought down.

Gillingham responded with their own shot in the box minutes later, seeing the ball float wide from Vadaine Oliver.

The Dons continued to threaten with some neat link-up play, particularly between Morris and Jerome, with the latter breaking the deadlock after 19 minutes.

Jerome had an earlier shot blocked on the edge of the box, with the Dons retaining possession well and passing the ball around before feeding the 34-year-old inside the box, seeing him slot the ball into the back of the net - giving the Dons an early lead in a league match for the first time this season.

The visitors went on the offensive after going a goal down, but the Dons came closest to scoring again with Harvie's pinpoint cross finding Morris deep in the Gillingham box.

His shot, however, couldn't be guided goalwards and went out for a goal kick.

Gillingham had some calls for a penalty, but the referee instead gave the home side a free kick for Samuel's perceived dive.

The visitors certainly grew into themselves throughout the first half, with Gillingham pressuring the Dons defence and coming close with a number of set pieces.

A cross led to a shot that could easily have put Gillingham level, but non of the red shirts in the far side of the box met the ball, sparing the Dons' blushes as they looked to regain their shape.

Despite the onslaught from Gillingham, the Dons persevered and held onto their lead as the ref blew for half time.

The Dons extended their lead to two just six minutes into the second half, receiving the ball from fellow Norwich loanee Louis Thompson in the middle of the Gillingham area before slotting home beyond the reach of the keeper for his first league goal of the season.

Gillingham responded once again with more attacking plays, coming close to cutting the lead back down to one with a low cross flying inches away from a wide open Oliver at the back post.

Dons could have added a third before the hour mark with Scott Fraser seeing a low-driven shot from the edge of the box well saved by Jack Bonham.

Minutes later and Fraser allowed Harvie to himself have a shot at extending the lead, seeing the Scottish left wing back flash his shot across the face of goal after collecting the ball unchallenged deep inside the Gillingham area.

Jerome showed his strength and pace with a run on goal, getting away a strong shot, only to see Bonham block it in what would be his last real contribution to the game.

Joe Mason, who replaced Jerome after 69 minutes, came close himself after five minutes with a driving run into the box, only to see his shot narrowly denied by Bonham.

Morris had a chance to add to his goal tally late into the game, with fellow Norwich loanee Thompson feeding a pass to him to get away a shot, but once again the Kent club's keeper blocked his effort, keeping his side in it.

Despite his side having some chances, including a threatening late free kick in the dying minutes of the match, his efforts were in vain and it was the Dons that claimed all three points.

The victory for Russell Martin's side sees them jump up to 17th in the league prior to the 3pm kick-offs, which will decide where they sit by the end of the day.