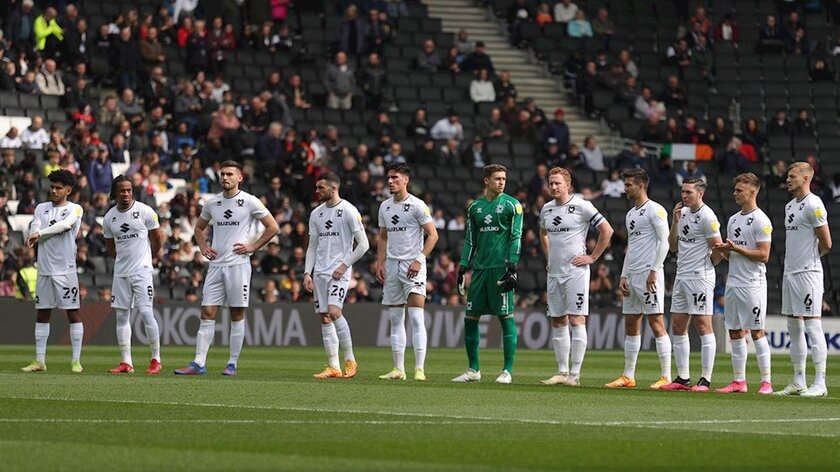 Milton Keynes Dons have finished the 2021/22 League One regular season in third place, confirming their position in the playoffs.

The Dons ran out as 5-0 winners away at Plymouth Argyle on the final day of the regular season, but Rotherham United also claimed three points in their 2-0 victory over Gillingham and edged out Liam Manning's side by just one point.

It has been a spectacular first season in charge for Manning and his backroom staff, who arrived at Stadium MK after the season had begun due to the departure of Russell Martin for Championship club Swansea City.

Since taking charge, the Dons have become one of the most attractive teams in the third tier and gave themselves a chance at automatic promotion on the final day of the season - even with Rotherham and Wigan having had games in hand that could have secured their fates even earlier.

A Player of the Year showing from Scott Twine, who scored 20 goals and provided a further 13 assists, helped lead the way for the Dons who will now have at least two more fixtures to try to earn promotion through the playoffs.

With the Dons finishing in third place, it sets up a Buckinghamshire Derby with Wycombe Wanderers, who ended their respective campaign in sixth place - with the two semi-final fixtures taking place on Thursday 5th May (away) and Sunday 8th May (home).

An aggregate victory over the next two fixtures would send the Dons through to Wembley Stadium to contest the League One playoff final, against the victor of Sheffield Wednesday and Sunderland's semi finals, on Saturday 21st May.