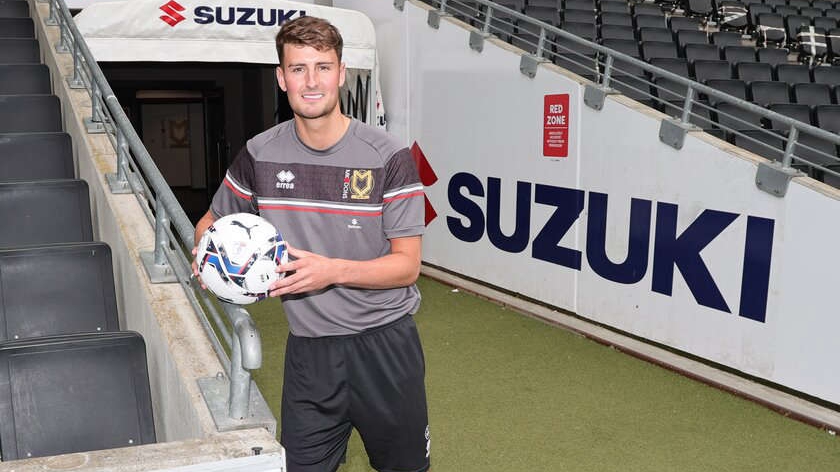 In their second loan signing of the day, the Dons announced that the 24-year-old will be at Stadium MK for the duration of the 2021/22 League One season.

Robson joins the Dons off the back of a promotion-winning season with the Seasiders, where he played 28 times on route to a third-place finish in League One, helping to guide the team into the second tier via the playoffs.

As well as Blackpool, the central midfielder brings with him experience with both Sunderland, Grimsby Town and Dundee and will compete for a key role in Russell Martin's side this coming campaign.

Speaking of joining the Dons, Robson commented: "I’m delighted to be here. This is a great opportunity for me and I can’t wait to get started."

"I had a chat with the Gaffer here and I believe MK Dons is a club that is going places. I was part of a successful Blackpool team last season and hopefully I can bring some of that positivity here."

He added: "MK Dons pride themselves on keeping the ball and dominating possession, and that is something that suits me down to a tee. I’m also from the North East so I love a tackle as well!"

Manager Russell Martin himself commented: "Ethan is a gifted footballer who played nearly 40 times for a promotion-winning team in this division last season."

"He really suits the way that we play with both his technical ability but also with his athleticism, and after speaking to numerous people who have coached or played with him, he clearly ticks all the boxes for us."

He added: "Ethan certainly bolsters our midfield and, I have no doubt, will add value to us on the pitch this season."

Sporting Director Liam Sweeting continued: "Ethan is somebody we have been tracking for a long time, ever since he came through at Sunderland."

"We watched him do well on loan at Dundee and Grimsby Town and then saw him first-hand with Blackpool last season, where he played close to 40 games for them as they earned promotion via the play-offs."

He concluded: "His attributes are a really good fit for the way we play. The midfield area is an important part of our team and we’ve managed to attract somebody in Ethan who is capable of handling the ball and has great quality going forward."