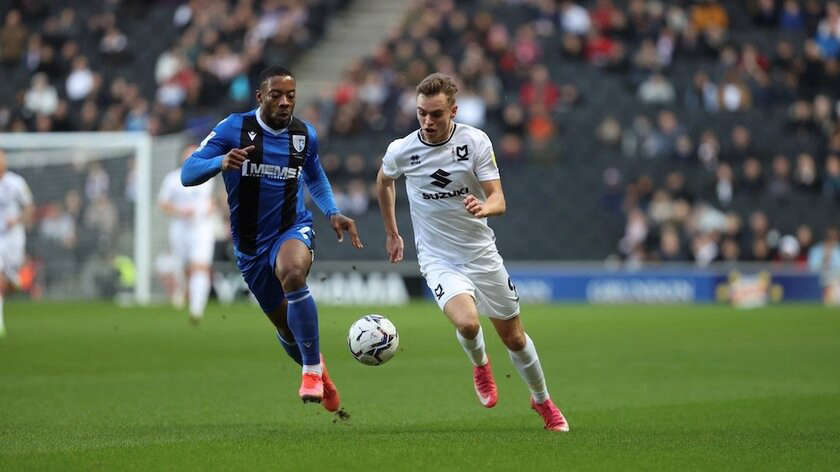 Milton Keynes Dons began 2022 with a 0-0 draw against League One strugglers Gillingham at Stadium MK.

The Dons had not played since Boxing Day made just one change to the side that fought back to win against Lincoln City, with Troy Parrott replacing Hiram Boateng in the starting eleven.

The game was also Gillingham's first since December 11th, with the visitors searching for their first victory since October 19th and first league point since November 13th.

The match began fairly even between the two sides, with the Dons having the first positive attacking movement in just the third minute of play, with Scott Twine sending Daniel Harvie racing down the left flank, seeing the Scotsman try to pick out Troy Parrott deep in the visitors' box.

The Gillingham defence held strong, however, and cleared the danger. Moments later and the visitors had a free kick just outside the Dons' area, but the ball flew directly into the comfortable arms for goalkeeper Andrew Fisher.

Mo Eisa had an early chance, with both Twine and Parrott in support inside the penalty area, but his effort rolled along the ground and into Jamie Cumming's hands.

The Dons were gifted a threatening free kick opportunity in the 17th minute, with Peter Kioso hauled down on the right-side edge of the visitors' box. O'Riley picked out Twine inside the box, whose shot was blocked and sent back to the set-piece taker, whose subsequent effort high and wide of the goal.

Liam Manning's side had a great opportunity on the counter attack, with Twine remaining on his feet despite Jack Tucker trying to use his physicality deep in the Dons half.

Twine picked out Eisa running down the right flank, with the Dons striker sending the ball deep into the box towards an open Parrott, only to see his effort cut out from a Gillingham defender and force a corner.

The Dons almost opened the scoring just before half-time as Twine, picking up a pass from Kioso inside the Gillingham box, sent a low-driven effort narrowly wide of Cumming's post.

The visitors grew into the second half and were unlucky not to at least force Fisher into making a save as McKenzie struck the side netting with his effort from inside the penalty area.

Little action took place in front of either goal for a long stretch in the second, until Matt O'Riley saw his edge of the box effort sail just wide of Cumming's post.

Parrott collected the ball deep in the Gillingham half and squared his pass to Twine, who laid it into O'Riley who shot with composure after a touch, his effort flying low and just wide of the post.

Despite the reinvigoration, the Dons were unable to break down a sturdy Gillingham defensive showing, seeing the game end 0-0 and gift the visitors their first points in the league over more than a month.

The Dons remain in seventh place in the League One standings, with their next league fixture coming away to Accrington Stanley next Saturday (8th January) after a trip to Charlton Athletic in the Papa John's Trophy on Tuesday.