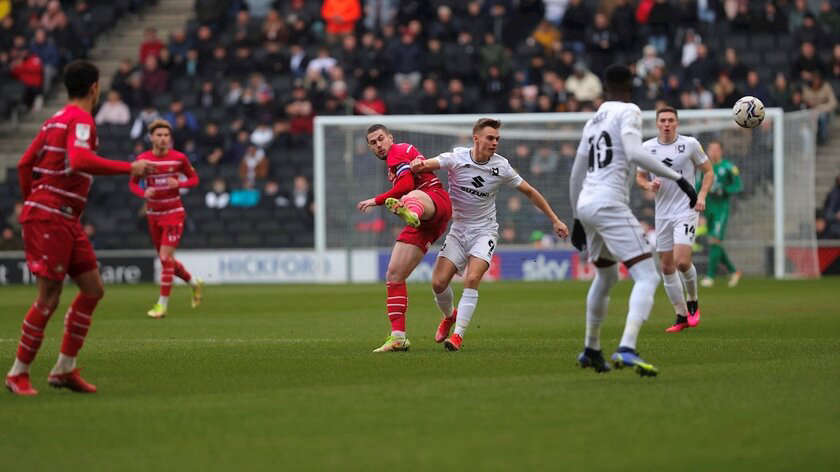 Milton Keynes Dons lost to Doncaster Rovers for the second time this season, with a 1-0 score at Stadium MK.

With injuries and recent departures limiting their options, the Dons reverted to a 4-2-3-1 system with an attacking four of Scott Twine, Troy Parrott, Theo Corbeanu and Mo Eisa.

The Dons started brightly, with Parrott getting a chance just minutes in and Eisa taking an ambitious effort from long range to set the tempo of the match.

Twine also looked to get a shot on goal within the first 15 minutes of play, skipping past his man before seeing his effort deflected comfortably into the goalkeeper's arms.

Moments later and the Dons were on the counterattack with Theo Corbeanu racing down the right flank with acres of space in front of him.

The 19-year-old cut into the Doncaster box and laid a pass to Parrott, who tried to shoot but saw his effort blocked.

Corbeanu and Parrott both looked to open the scoring seconds later with a couple of efforts, the former seeing a half-volley blocked inside the box while the latter's ball sailed through the penalty area and just wide of the post.

The Canadian international saw another effort scrape the side netting after Josh McEachran won back possession and passed it off to Twine, who was able to pick out Corbeanu deep inside the Doncaster box.

Another flurry of chances followed for the Dons, with Twine almost getting his effort past the visitors' defence, but it was Doncaster that opened the scoring through Jo Dodoo after a quick counterattack from Josh Martin allowed him to strike the ball into the bottom corner.

With six minutes of added time in the first half, the Dons looked for a way back into the game. They nearly had it after Dean Lewington sent a long ball out to Daniel Harvie, who volleyed it first time and picked out Eisa inside the box.

The Sudanese striker connected with his head perfectly and sent it towards goal, but saw goalkeeper Louis Jones collect the ball into his chest.

The Dons started the second half immediately on the front foot, with Corbeanu crossing the ball to Twine inside the box, seeing the Dons number 9 get the ball caught between his legs.

A minute later and Parrott had a chance to shoot inside the area, seeing his effort blocked after he moved to find space.

Parrott also turned provider minutes later as he whipped in a dangerous low cross towards Eisa inside the six-yard box, seeing Jones dive on it just in front of the Dons target man.

The Dons continued to press against their opponents, who were content to sit back and take the pressure with their slim lead in tact with just over ten minutes remaining in the game.

Liam Manning's side looked to have levelled the score when a bouncing ball lofted over a Doncaster defender and tricked the goalkeeper, who fortunately saw it cleared off the line and away from danger at the last second.

Twine's free kick in added time forced Jones into making a low save, with no Dons players able to pounce on the rebound, with Twine eventually winning another free kick - this time further out, with the ball sailing straight into Jones' arms.

Daniel Harvie gave the Dons hope in the dying seconds of added time, sending in a deep throw and finding both substitutes Hiram Boateng and debutant Connor Wickham in the box.

Wickham was able to get a strike in, but the ball hit the side netting and ended all hopes of snatching a point from the game.

The final whistle blew, bringing an end to a disappointing afternoon at Stadium MK, with the Dons unable to break down the visitors after they followed the pattern of other teams this season - putting all players behind the ball and sitting back while weathering the storm.

The Dons had plenty of chances to get a goal, but they lacked clinical finishing and could not break down the defensive effort of the visitors.

They remain fifth in League One, but additional signings and a quick turnaround in performance will be needed to get them back on track when they travel to Burton on Tuesday night.