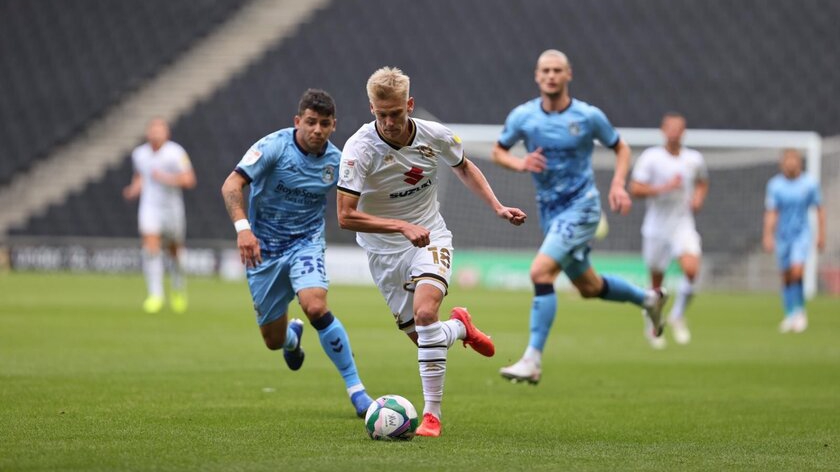 Milton Keynes Dons have been knocked out of the Carabao Cup at the first hurdle thanks to a late goal from Coventry City striker Tyler Walker, seeing the visitors earn a 1-0 victory.

The Dons started the game brightly, retaining much of possession and forcing two corners early.

Striker Carlton Morris had a chance just a few minutes into play with a dangerous header in the box, rising above the defender but ultimately seeing it blocked, leading to a corner.

The Dons had a great chance to take the lead ten minutes into the game when Coventry goalkeeper Marko Marosi was dispossessed, but the resultant shot went wide of the post.

Callum Brittain was called into defensive action as Ryan Giles carried the ball through the Dons' half and towards goal, with the defender forcing the visitors into a corner.

Coventry came close a few minutes later as Giles once again was involved, but the Dons defence stood tall and forced another corner.

The Dons were gifted a great opportunity to go ahead after 25 minutes when Matthew Sorinola was fouled in the box by Declan Drysdale, with the Coventry man sent off and a penalty awarded.

Carlton Morris' shot, however, was saved by the Coventry keeper and his follow-up shot flew above the bar as the Dons striker slipped.

Ryan Giles threatened the home side shortly after the penalty miss, running through on goal once again but seeing his shot slide just wide of Lee Nicholl's far post while David Kasumu spared the Dons' blushes as he made an inch-perfect tackle to keep the visitors from having yet another chance on goal.

Both sides shared possession fairly evenly through the first 45 minutes, with the home side looking very positive in possession and with their pressing. The score remained tied at 0-0 as the sides entered the break.

The Dons started the second half brightly, pushing into Coventry's penalty area early on, but both plays were blown dead thanks to offside calls.

Callum O'Hare took a chance on some Dons miscommunication with a strong shot from just inside the box less than five minutes into the second half, with his shot curling past Nicholls' far post.

Sam Nombe had a great chance to capitalise on Coventry's own miscommunication, overlapping a defender to get a shot away at close range.

A few minutes later and Morris had a chance on the edge of the box as the ball trickled out in front of him, but his shot never threatened the keeper and sailed wide.

Morris was involved once again less than a minute later, taking the ball into Coventry's area before pulling it back to Callum Brittain, who had a strong shot saved by Marosi, keeping the visitors level.

Sorinola got in on the action at the 55 minute mark, beating the Coventry defence on a quick run and a cross-pitch pass from Brittain, getting a shot off but seeing it blocked and earning his side a corner.

The young MK Dons player once again put himself into a strong position as he received a Lasse Sorensen pass in the area but opted to cross the ball rather than take a shot, with his effort being met by only Coventry shirts.

Each side shared shots and travelled up and down the pitch, trying to find a way to break deadlock.

That break came after a Coventry free kick resulted in Tyler Walker being able to slot home a low shot from inside the box, putting the ten-men visitors in front with just eight minutes left in the game.

Coventry had a chance to double their lead when Amadou Bakayoko picked up the loose ball on the edge of the box and clear through on goal, but saw his initial shot saved by Nicholls before his second hit the post.

The home side were unable to pull things back and are now out of the competition, despite arguably being the better team throughout the match and having the man advantage for much of the match.