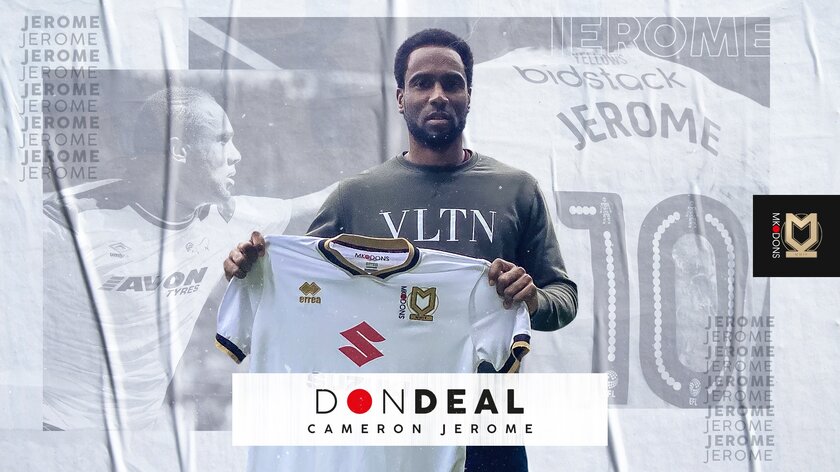 Jerome arrives at Stadium MK after playing the previous two seasons with Göztepe in the Turkish Super League, where he scored eight goals (with four assists) in 50 league games.

Prior to his stint in Turkey, Jerome played the majority of his career in the Championship and Premier League with clubs such as Stoke City, Derby County, Norwich City, Birmingham City and Cardiff City.

With the Dons selling top striker Rhys Healey earlier in the summer, manager Russell Martin had been looking to bring in someone to fill the void and now it seems he has gotten his man with the 34-year-old available on a free transfer.

Speaking of his latest addition to the team, Martin said: "I’m really happy, Cameron is a player I spoke to a lot during this transfer window, he had to clarify his situation with regards to his situation in Turkey and he had a lot of offers abroad and in England."

"I’m really pleased he’s decided to come play for MK Dons, it’s a real bit of experience for the group and will add to what Dean [Lewington] and Richard [Keogh] bring."

"Most importantly, we’ve signed someone who is really hungry to show what he’s still got, he’s not lost any of the power of pace he’s shown regularly throughout his career."

He added: "He’s really going to add to us as a group, the strikers we’ve got, and the process we’re working on. He really buys into everything we are doing and he’s going to be a really good signing for us."

Speaking of his signing for the club, Jerome commented: "I'm delighted. I've spoken to Russ a few times over the summer, about the project he has here and it felt like the perfect fit for me to come and play football."

"I've been out of the country for a couple of years, but I wanted to come back to England, and MK Dons is the perfect fit for me."

"With Russell at the helm and the younger players coming through, I have the opportunity to bring something on and off the pitch."

"In that respect, it seems like the right fit for me, especially with the style of football he wants to play. It's a great place to come and play and I'm excited to get going."