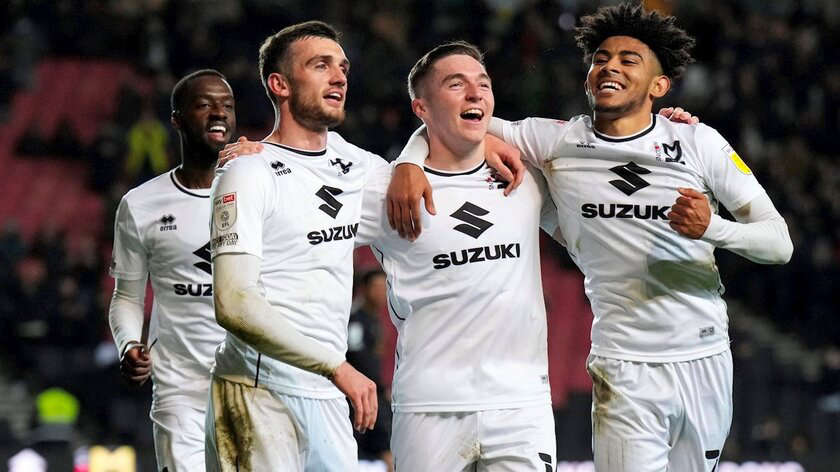 Two goals from Troy Parrott and Conor Coventry allowed the Dons to climb to second place in the League One standings, leapfrogging former league-leaders Rotherham United who now drop to third - though now have two games in hand.

The opening minutes of the match saw a number of free kicks awarded for both sides, though generally favouring the home side, with Troy Parrott on the receiving end of a couple of hard challenges from the visitors.

After the early scare, the Dons started to assert themselves on their opponents and began pressing higher up the pitch and putting more balls into the box - with a Twine free kick narrowly headed out for a corner and a long ball over the top of the defensive line coming close to reaching him later on, with goalkeeper Dave Richards just snatching it at the edge of his penalty area.

Parrott opened the scoring for the home side in the 24th minute of play with a possible goal of the season contender. Dean Lewington spotted the run of the Republic of Ireland international, launching it over the top of the defensive line.

Parrott coolly collected the ball over the top, and lofted it perfectly into the far corner as Richards came rushing forward to limit the Dons striker's options.

The Dons, not content with their one-goal lead, forced Richards into a save when Daniel Harvie sent a clean cross deep into the box, with Kaine Kesler-Hayden getting a strong, unchallenged header towards goal - with the Crewe goalkeeper standing firm and claiming the ball.

Moments later and the Dons came close to extending their lead. Scott Twine stood over the ball on the edge of the penalty area and lofted it almost perfectly over the defensive wall, seeing it rattle off the crossbar to the visitors' relief.

The Dons felt they should have been awarded at least a free kick as Kesler-Hayden, charging towards goal as the last man, received a perfect pass over the top and was tripped around the edge of the penalty area, but nothing was awarded.

Just over five minutes before the half, Conor Coventry extended the Dons' lead to two. The Irish midfielder picked up the ball near halfway and charged forward, with open space in front of him.

Crewe defenders began to close in on him, but he unleashed a rocket of a shot that left Richards flailing mid-air and struck the back of the net, sending the crowd into rapturous cheers.

Twine, whose pass was picked up by Coventry, was credited with his 12th assist of the season on the goal - taking his goal contributions tally to 27 on the season, breaking the single season record for a Dons player.

The Dons began the second half on the front foot, with Mo Eisa feeding a pass out wide to Harvie, who tried to send the ball back into the box towards Eisa, with the striker cut out and earning a corner.

Manning's side continued to put pressure on the visitors, with Twine earning another free kick in the opposition half ten minutes into the second 45 - sending the ball high over the crossbar much to Richards' relief.

Twine once again almost became provider as he hooked a pass into the path of Darling deep inside the Crewe box, with the defender trying to tap the ball into the net, but seeing it bobble and blocked by a defender.

With ten minutes remaining in the match, Kesler-Hayden almost fed substitute Theo Corbeanu a good opportunity in front of goal, sliding a low cross into the box before the Canadian was cut out and the ball bounced away from danger.

Connor Wickham almost provided Twine with a goal, sending in a perfectly placed low cross in front of goal, with Twine just missing a touch deep inside the six-yard box that would have surely extended the Dons' lead to three.

A defensive lapse in added time allowed Bassala Sambou to snatch a goal for the visitors, but it was too late to have an impact on the result as the Dons held onto the ball and saw out the game.

The result sees Manning's side extend their unbeaten run, with 22nd January the last time a result went against the Stadium MK side, setting up a tense final five-game stretch to the end of the regular season.