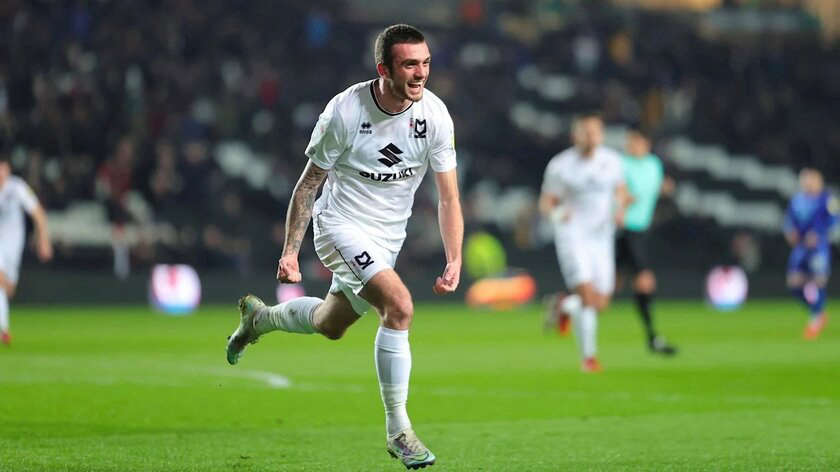 Troy Parrott scored a brace as Milton Keynes Dons picked up a fifth consecutive victory with a convincing 3-1 score over Cheltenham Town at Stadium MK.

The Dons entered the match on the back of a comeback victory over league leaders Rotherham United, and were unbeaten in their previous ten fixtures - looking to maintain a strong push towards the automatic promotion places with Cheltenham Town the visitors to Milton Keynes.

The visitors got the game underway with a unique formation at kick-off, but after sending the ball directly out for a throw it was the Dons who enjoy the majority of possession through the opening five minutes.

Dean Lewington was called into action after a quick Cheltenham counter, forcing a corner and preventing a cross into the box - with the ensuing set piece being cleared calmly by Matt Smith.

Theo Corbeanu put a threatening left-footed cross deep into the box around the ten minute mark, trying to pick out the rising Kaine Kesler-Hayden near the back post. Cheltenham's defence were well organised, however, and were able to head away the danger.

Cheltenham countered well again on the 20-minute mark, with Tennai Watson racing back and heading the ball out for a corner to prevent a free shot on goal for the visitors.

The Dons took the lead in the 25th minute thanks to a Troy Parrott header. The goal came courtesy of a Smith cross after the ball had bounced around the penalty area from a corner, with the Irish striker netting his fourth league goal of the season.

It took less than two minutes for the Dons to extend their lead to two, with Mo Eisa coolly slotting home his third goal in three games, his eleventh of the season, after collecting a perfectly placed Harry Darling pass over the top of the visitors' defensive line.

Warren O'Hora came close to adding a third shortly after the half-hour mark, linking up well with Corbeanu to get a low shot away inside the box, with Owen Evans gathering the ball in the his arms to keep the deficit at two.

The Dons began the second half where they left off with the first; firmly on the front foot and putting pressure on the visitors - with Eisa trying to make something happen for Parrott inside the box and Corbeanu floating an effort towards goal after a deep free kick.

Cheltenham almost caught the Dons on a break, with Ramsey getting forward. Watson and O'Hora, however, worked well to clear the danger and send the ball back in the other direction.

Moments later and Charlie Colkett was able to send a cross into the Dons' box, connecting with a teammate's head but seeing the effort fly harmlessly over Jamie Cumming's crossbar.

Things settled down, and the Dons began to regain their composure. They started to put pressure on the visitors once again, with Parrott narrowly missing an opportunity to get a headed effort on goal after narrowly missing a long ball over the top with just over 15 minutes remaining.

Corbeanu had an impressive display of individual skill late in the match, taking the ball down the right flank and beating two defenders with his strength and tricky feet before unloading a strong effort from range, with Evans making an easy save.

It was the Canadian winger involved once again as the Dons made it 3-0, with Corbeanu taking the ball down the right flank before slotting a pass through to Parrott.

The striker cut into the penalty area and struck the ball cleanly and low into the far corner, beating Evans and giving the Dons a lead the visitors could not come back from with less than five minutes left on the clock.

Cheltenham picked up a consolation goal in the 89th minute of play through captain Will Boyle, but the Dons' lead could not be chased down and Liam Manning's side went level on points with second place Wigan Athletic - their next opponents in the league this Saturday.