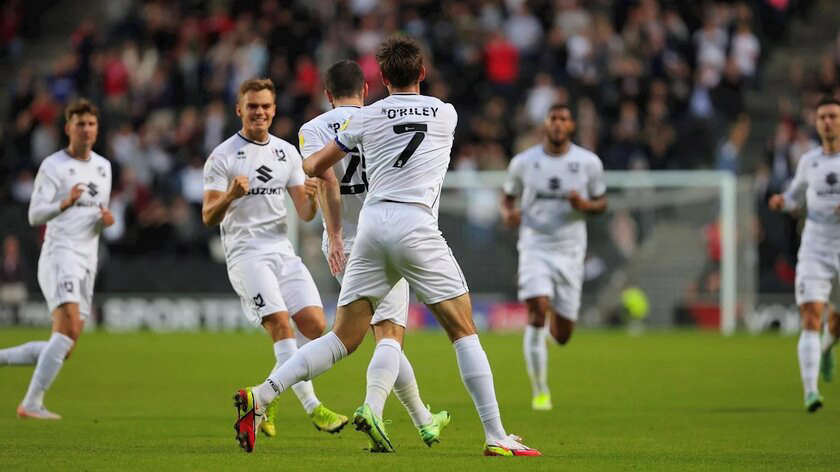 Mo Eisa scored minutes after the hour mark to give Milton Keynes Dons a 2-1 victory against Charlton Athletic at Stadium MK on Tuesday night.

The two sides entered the match at Stadium MK searching for their first win of the season, with both sporting identical records in their first two league matches with just one point each- the Dons earning theirs in a 3-3 draw with Bolton Wanderers on the opening day of the season.

So soon into his new job, Manning continued to deploy a familiar looking team against Charlton, with the only change from Saturday's 2-1 loss to Sunderland seeing Aden Baldwin draw into the starting line-up in place of Tennai Watson.

The match was largely uneventful through the first eight minutes, with the first real threat coming when Charlton earned a free kick deep into the Dons' area.

A cross brushed Daniel Harvie's fingers as it was sent in, gifting the visitors a set piece just outside the Dons' box. The home side held firm, however, and cleared the danger away with relative ease.

The visitors then had a chance on the counter attack, but a shot rocketed off Jayden Stockley in the Dons box and Harry Darling held strong against pressure from the striker to make a clearance on the edge of the six-yard box.

A similar free kick was awarded to the visitors after another ball was adjudged to have hit Harvie's arm deep into the Dons box. Charlton pounced on this opportunity, with Albie Morgan's ball curling narrowly past the leaping defender and finding Stockley who headed home - giving the Addicks a 1-0 lead after just 15 minutes.

Charlton's lead lasted less than three minutes, with Troy Parrott scoring his second goal in as many games thanks to a perfectly threaded pass from Scott Twine found the Republic of Ireland international through on goal.

A well-placed low shot flew past Craig MacGillivray to pull the home side back level in the 18th minute of play.

The goal buoyed the Dons, seeing them grow in confidence and begin to push forward more often, with both Parrott and Eisa having opportunities in front of goal - but both unable to catch the ball cleanly enough to make them count.

After a period of settled play, Charlton began to get the better of opportunities; with multiple corners, free kicks and pressure in and around the Dons' penalty around after the half-hour mark - with a stout Dons defensive effort managing to keep the visitors at bay, including an Aden Baldwin block on Sean Clare's strong shot inside the box.

Scott Twine attempted an effort from range, narrowly missing, while Stockley tried to add to his earlier goal but was denied by a strong Andrew Fisher save a minute before the half time break - ensuring the home side remained in it when the whistle was blown.

The Dons made one change at half time, with club captain Dean Lewington coming on for Daniel Harvie.

Liam Manning's side started the second half brightly, attacking the visitors early on, with Parrott trying to find an opportunity for Eisa - with the latter unable to get a shot off after receiving a pass deep inside the box.

Ethan Robson almost gifted the home side when he lost the ball in the middle of the Dons' half, seeing Jaiyesimi charge forward and find an open Conor Washington on the edge of the box - with the Charlton man narrowly missing his shot at the far post.

Just like the first half, play appeared to settle with both sides taking the ball end to end at times - with Parrott and Jules linking up to find Eisa in the box, but the striker's effort sailed over the bar.

The Dons pulled ahead shortly after the hour mark when Mo Eisa tapped the ball home from close range. Scott Twine sent a free kick deep into the box, with Eisa seeing a close-range shot blocked and falling to Parrott.

The Irish striker managed to bring the ball down and slot a pass through back to Eisa, who was open in front of goal and could not miss from six yards out.

A long period of even play followed the Dons' second goal, until Eisa looked through on goal with less than ten minutes remaining in the match. The striker was called for a dubious offside before being taken down on the edge of the box, with the referee giving Charlton a free kick.

After the fourth official announced an additional seven minutes of stoppage time, Harry Darling came close to heading the ball deep into the box before Stockley managed to clear it out for a Dons corner.

The Dons fought hard to keep Charlton hemmed in their own half deep into injury time, with Parrott and O'Riley demonstrating their strength and ability to hold the ball up while under pressure from opposition defenders.

Despite the visitors' desperation to get the ball forward, the Dons held on and claimed their first victory of the new season, and under new head coach Liam Manning, compounding Charlton's misery after a disappointing start to the campaign for the London club.

The Dons now face Ipswich at Portman Road on Saturday looking to build on this positive result, facing Scott Fraser for the first time since his departure earlier in the off-season.