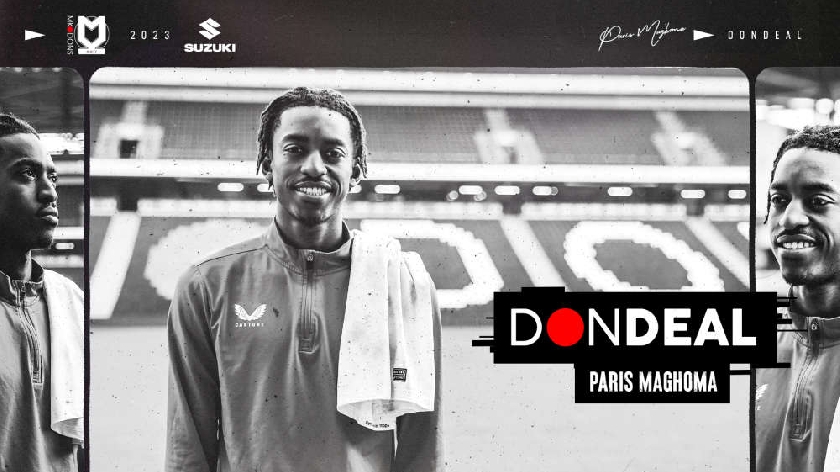 Maghoma, 21, will spend the remainder of 2022/23 campaign with the Dons and becomes the Club’s third signing of the January transfer window.

An England youth international, Maghoma is a product of Tottenham Hotspur’s Academy system who joined the Bees in January 2020 and, last year, signed a long-term contract to remain at the Gtech Community Stadium, having featured on the bench for the senior side on several occasions.

This will be the midfielder’s second loan spell away from Brentford, having made 24 appearances while on loan with AFC Wimbledon during the first half of this season.

“Coming to MK Dons was a no brainer for me,” Maghoma said in an exclusive first interview with iFollow MK Dons. “Coming to a club like this is a good challenge for me and I am definitely looking forward to the experience.

“There were a number of options for me but this was always the eye-catching one. Taking this next step, I wanted to come to a club that plays this style of football and I also wanted to test myself at this level.

“I like to get on the ball and make things happen but, at the same time, it’s all about working hard and doing the stuff when you’re not on the ball too.”

Maghoma added: “I am looking forward to these first two home games and hopefully that will help me settle in quickly.

Born in Enfield, Maghoma began his career with Tottenham Hotspur, before joining Brentford in January 2020. During his time with Spurs, he represented England at youth level, making 15 appearances from Under-15s through to Under-20s.

Maghoma, a regular feature for the Brentford B team, earned a place on the bench for the Brentford first team on six occasions across the 2020/21 and 2021/22 seasons, including for four Premier League fixtures.

At the start of this campaign, Maghoma joined AFC Wimbledon on loan and made his senior debut in their Sky Bet League Two fixture with Gillingham in July. The midfielder totalled 24 appearances while on loan in the capital, before returning to Brentford in January.

Maghoma, a brother to former professionals in Jacques and Christian, will look to add to his 24 senior games while with the Dons during the second half of the 2022/23 campaign.

Sporting Director Liam Sweeting said: "As was well discussed at the start of the transfer window, we set out to improve the physicality of the squad and we feel Paris is someone who definitely improves us in this regard but also adds significant qualities arriving into the final third. When we sat down with Mark to discuss Paris - it was clear everything aligned in the moment to sign him now.

"Paris arrives after completing his rehabilitation at Brentford following a minor injury but also after a very successful first loan in League Two where he managed to play consistently and developed considerably in the process. We thank Brentford for trusting us with this next chapter of Paris's development and look forward to watching his impact at Stadium MK."

Head Coach Mark Jackson added: “Paris is someone we have looked at in real detail and been pushing to sign throughout this window.

“He fits the profile of what we are looking for, in terms of his ability on the ball and physical attributes as well. I’ve been insistent that we will only bring in players who will enhance and we are very confident that Paris will do that.”