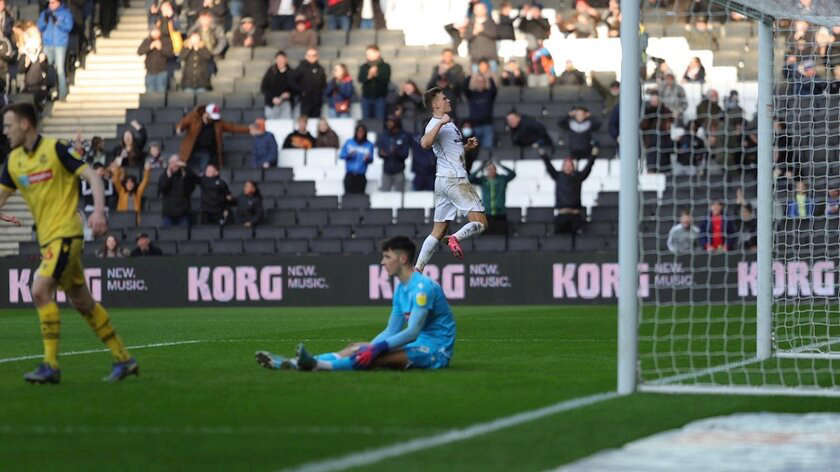 Milton Keynes Dons extended their unbeaten run to eight games with a convincing 2-0 victory over Bolton Wanderers at Stadium MK.

The Dons entered the match on a stunning run of seven games without a loss, their last coming against Doncaster Rovers over a month earlier, with Bolton Wanderers themselves with eight wins in their past ten making it a showdown between two in-form sides.

The match began with the Dons largely in possession but predominantly hemmed in their own half, with Bolton pressing high and keeping the pressure on the home side.

The Dons' first real break forward saw Dean Lewington pick out the run of Mo Eisa, but Ricardo Santos held off the pursuing striker and allowed goalkeeper James Trafford to scoop the ball up without incident.

Kaine Kesler-Hayden looked to open the scoring just shy of the ten-minute mark with a great bit of individual skill, taking on opposing defenders inside the Bolton box - turning and getting two swipes of the ball, seeing both blocked and eventually sent out for a corner.

Dons felt they had a shout for a penalty when Eisa was barged down inside the box while chasing down a well-placed through ball, but the referee saw nothing wrong with the challenge.

Moments later and Scott Twine appeared to have opened the scoring as he barrelled a shot forward while being tackled, only to see Trafford narrowly reach the ball at the last moment to keep the score level.

The Dons finally broke the deadlock on the 17th minute when Eisa smashed home from five yards. The play began with Harry Darling striking a deflected effort from range and forcing Trafford into an awkward palmed save.

The ball dropped into the path of the lurking Eisa, who avoided the keepers attempts to jump on the ball, and he smashed home the shot from close range to put Liam Manning’s side 1-0 ahead.

The Dons controlled large portions of the game after taking the lead, getting bodies forward at every opportunity, but it was Bolton who came closest to scoring the second.

After an Eisa effort floated narrowly over, and was called for offside, Bolton were able to put pressure on the Dons once again as Kyle Dempsey was able to run unchallenged into the final third and get an effort away, seeing it go narrowly wide.

The Dons held onto their narrow lead as the half-time whistle blew, with Manning's men needing to build on a lively first 45 minutes.

The second half got underway with the Dons earning themselves a free kick deep into Bolton's half, with Twine's delivery into the box unable to pick out a white shirt and was cleared away.

The game became more physical, with tackles flying around on both sides and the Dons on the receiving end of an interesting non-call when Troy Parrott was barrelled over, as well as Twine earning another free kick minutes before the hour mark.

The visitors threatened on the hour mark with a ball sent deep into the Dons' box, beating a crowd of defenders, but with no one there to take a shot - allowing the home side to clear the danger.

A corner moments later saw Santos once again rise above the Dons defence and get a firm header towards goal, seeing the effort narrowly fly over Cumming's crossbar, with Bolton taking control of the game.

It was the Dons, however, who scored the next goal of the game with Twine hitting the back of the net with 15 minutes remaining on the clock.

Twine raced forward to put pressure on Trafford to clear the ball, with his effort falling to Kesler-Hayden inside the Bolton half. The wing back took the ball forward before cutting a pass back to Twine inside the box, with the Dons' #9 putting his side 2-0 ahead with his 14th goal of the season.

The second goal reinvigorated the Dons, who continued to push forward in search of another. A third goal almost came courtesy of a Twine assist, with the forward picking out Parrott open in the box, with the Republic of Ireland international's effort rolling along the ground and safely into the hands of Trafford.

After three minutes of added time, the whistle closed the curtain on an entertaining affair that sees the Dons maintain their third place position in League One, extending their unbeaten run to eight games and, with Wigan Athletic suffering defeat, going level on points with second place.

The Dons now have a week before the long trip up to league leaders Rotherham United, followed by a mid-week game against Cheltenham Town at Stadium MK, continuing their hunt to officially secure their place in the playoffs.