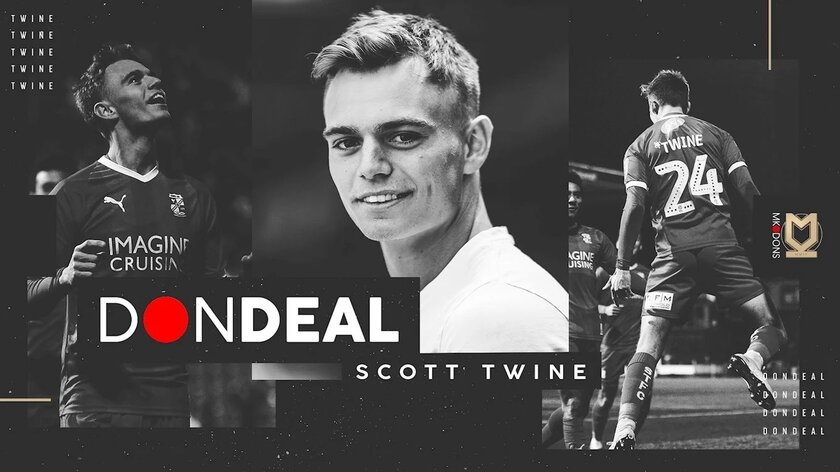 The 21-year-old has signed a long-term contract with the club and will arrive once his current deal with Swindon Town expires at the end of this month (June).

As he is younger than 24, the two clubs are currently engaged in discussions over the compensation that will be due to the Robins as a result of Twine's move to Stadium MK.

Despite his young age, Twine joins the Dons with almost 100 professional appearances under his belt, including a brief spell with Waterford FC in the League of Ireland in 2019.

The 2020/21 season was a positive one for the Swindon native, who scored 14 goals and added a further nine assists in 49 total matches played across spells with Swindon in League One and Newport County in League Two.

Twine is a versatile player that is capable of sitting deeper in midfield, further forward or even out wide on occasion, and he will be another promising young player that manager Russell Martin will have an opportunity to work closely with.

Speaking to the club's official website, Twine commented: "I'm over the moon. I'm an MK Dons player and I couldn't be happier."

"There were a few clubs interested but after I spoke to the Gaffer, he sold it to me. From that day, I couldn't wait to sign and get it sorted."

"I wanted to come here and play football the way we do, and I want to bring lots of goals and assists."

He concluded: "This is a club that is only going in one direction and that's up. The stadium is state of the art and to think I'm going to be playing here every week – I just can't wait!"

Sporting Director Liam Sweeting added: "We are delighted to have Scott on board. He is one of the most exciting young talents in the EFL and was our first-choice target in his position going into the summer."

He continued: "What’s even more exciting is that we were also his first-choice option – he completely buys into what we want to do here at MK Dons and he is eager to work and develop under our management team."

"I must say a huge thank you to both his representatives and the Chairman for allowing us to get this deal done smoothly and in advance of pre-season."

Manager Russell Martin also commented: "It is a big signing for us – not only because of the ability he possesses but because of how he suits our style of play. Credit to Liam and the Chairman for making this deal happen because it is an exciting deal for all of us."

"He plays in a number of different positions and you can just see the quality he has with the type of goals he scored last season, as well as the assists he made. Character is also important and he has that – he works extremely hard out of possession."

He concluded: "He was wanted by a number of clubs but we’ve been able to act quickly in bringing him into the Club. He’s desperate to be here and I know he’s very excited to get going - we’re just as excited to have him here!"