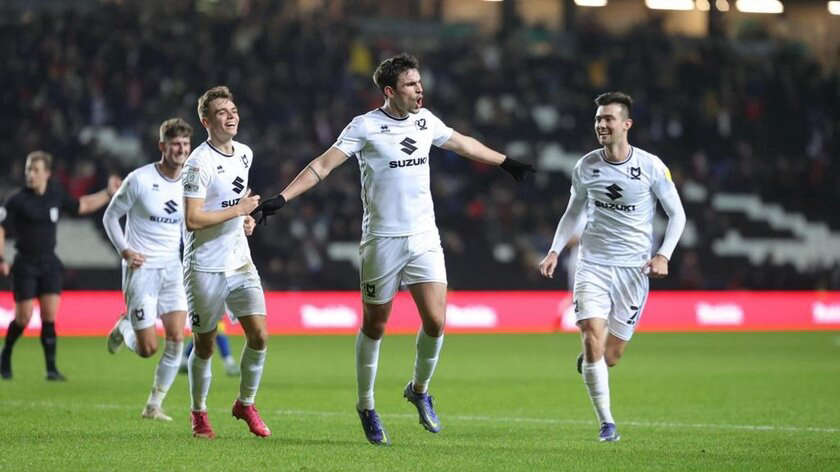 Arguably the most anticipated league match of the year came amidst the departure of first-choice goalkeeper Andrew Fisher to Championship club Swansea City, with the 23-year-old reuniting for former Dons boss Russell Martin.

For the man currently in charge of the Dons, however, it was business as usual and another three points with usual backup goalkeeper Franco Ravizzoli picking up a clean sheet in his league debut for the club.

The match began fairly slowly for the Dons, who found themselves struggling to get out of their own half within the first five minutes - until a well-placed kick from Ravizzoli managed to pin the visitors right into their own corner.

Taking advantage of the team's position, Scott Twine was able to get an early shot away, seeing his effort deflected and sent out for a corner - which was comfortably defended moments later.

Latest signing Theo Corbeanu got involved in the game early in the first half, showing some trickery on the right wing and attempting to get the ball into the box at every opportunity.

Mo Eisa had a golden opportunity to score, with Robson picking him out with acres of space in front of him. The striker opted to lay the ball off to Corbeanu, whose shot was blocked and found O'Riley on the edge of the box - with the Dons midfielder's subsequent effort lofted over.

The Dons once again came close as the ball bounced around the AFC Wimbledon box from a corner, with Twine having a shot blocked and seeing the ball drop to Harry Darling, who set up Ethan Robson, seeing his effort go over the bar.

Moments later and the Dons opened the scoring through Matt O'Riley on the half-hour mark. Nik Tzanev, far out of position, lost the ball to Eisa, who was able to pick out Twine racing towards the visitors' penalty area.

Twine sent a cross into Tennai Watson, who tapped it to O'Riley, with the Dons midfielder cutting inside and slotting home a cool left-footed shot to send the home side ahead.

AFC found themselves down to ten men when Nesta Guinness-Walker took down Corbeanu, racing down the right flank, earning himself a second yellow card ten minutes before the end of the first half.

The Dons began to take control of the game after the sending off, getting plenty of passes into the attacking third and having a number of shots blocked - with Watson seeing a rocket of a shot strike a body and keep things close.

Despite their chances, the score remained 1-0 to the home side as the half-time whistle blew.

The second began much brighter than the first for the Dons, who continued to use their momentum from the opening to get forward - Corbeanu and Watson linking up well on the right flank.

Twine and O'Riley partnered well with a threatening passage of play, seeing the Dons goalscorer force a low save from Tzanev with a shot from close range.

Anthony Hartigan had a half-chance for the visitors shortly after, but the rising effort never tested Ravizzoli who watched it sail over the bar.

Corbeanu, impressing on his debut for the club, came close to extending the Dons' lead when he connected with a well-placed Twine cross at the back post - seeing his effort land in the arms of Tzanev.

After one of the visitors' staff members kicked the ball out of Twine's hands, preventing him from taking a quick throw-in, the Dons midfielder sent Harvie racing forward, with the Scot taking a low shot and forcing a spilled save from Tzanev who jumped on the ball before Eisa could reach the rebound.

Twine displayed a moment of exceptional skill, weaving through the compacting AFC defence while keeping possession and forcing another low save from Tzanev while under pressure.

Twine once again could have extended the lead after collecting a pass from Eisa deep in the visitors' penalty box, seeing his close-range effort blocked and narrowly sent out for a corner.

Corbeanu then had a close effort of his own seconds later, cutting in on his right foot and striking a clean shot from the edge of the box - seeing the shot sails just wide of Tzanev's far post.

The Dons had a nervy moment five minutes from time, seeing a threatening ball sent deep into the box - connecting with an AFC Wimbledon head and sent up into the air, with Ravizzoli claiming the ball calmly.

Three minutes into added time and the visitors almost snatched a leveller as Cheye Alexander's strike from the edge of the box narrowly sailed wide of Ravizzoli's far post.

Alexander had one last attempt from long range, seeing the ball go wide once again, with the referee bringing the game to a close and seeing Manning's side claim all three points.

The victory helped the Dons overcome the disappointment of losing Fisher earlier in the day, and sees the team climb to fifth in the League One standings ahead of Saturday's trip to Portsmouth.