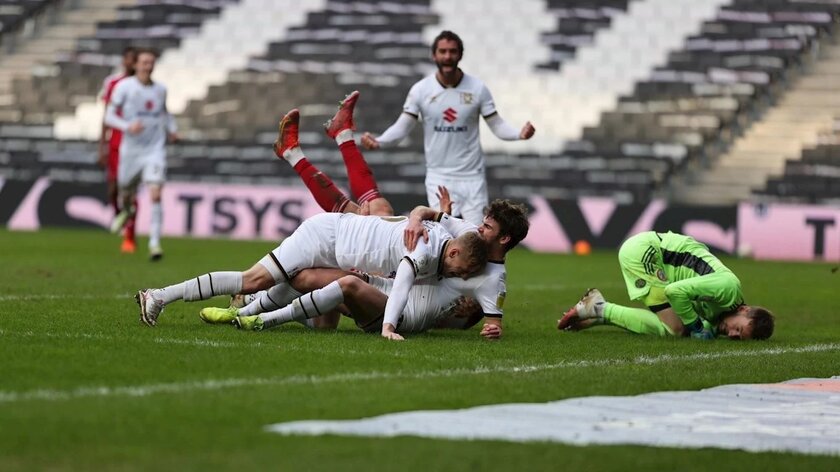 The Dons saw a two-goal lead erased in the second half of a lively match, until Matt O'Riley's diving header ensured the Milton Keynes club ended their winless run and claimed a much-needed three points.

Russell Martin's side started the brighter of the two teams, with some neat passing leading to some opportunities in the Accrington third.

The positive start by the Dons was rewarded after just six minutes of play, with veteran striker Cameron Jerome giving them a 1-0 lead with his 11th league goal of the season.

Matthew Sorinola lofted a pass over the top of the Accrington back-line, with Jerome able to beat a defender in the box. With goalkeeper Toby Savin chasing, Jerome took the ball wide before pivoting and slotting home from close range.

Sorinola and Jerome linked up again with another threatening chance for the Dons, with the 19-year-old wing back sending the ball across the face of goal, with Jerome getting a clean header to it at a tight angle - hitting the side netting.

Jerome followed this up with another strong strike that forced Saving into making a stop, with the home side growing in confidence through the first 20 minutes of the match.

Scott Fraser had a chance to double the Dons' lead ten minutes before the half, with Savin forced into a weak clearance under pressure from a chasing Jerome.

The Scottish midfielder latched onto the ball and running into the box before getting a shot off, which Savin managed to get enough to to deflect it away from the goal, keeping his team in it.

The Dons allowed a few lapses towards the end of the first half, but were lucky to keep Accrington at bay and hold onto their slim one-goal lead at the break.

The second half saw the Dons regain the effort from the majority of the first half, with accurate passes and plenty of attacking chances early after the break.

This led to Jerome adding his second of the match after 55 minutes. Sorinola once again was the provider with a perfectly placed ball into the Accrington box, with Jerome getting between two defenders and tapping beyond Savin from close range.

The two-goal lead did not last long, however, with some miscommunication leading to Dion Charles slotting the ball into the net with relative ease just two minutes after Jerome's second goal, bringing the score to 2-1.

Just over five minutes after Jerome had given the home side a 2-0 cushion, Accrington brought things level at 2-2 thanks to an Andrew Surman own goal resulting from a corner.

The Dons remained largely in control of the match but struggled to find a way to break the deadlock, with the fourth official indicated for an additional four minutes of time.

As with anything in football, surprise came as Sorinola once again sent a perfect ball into the box, with Matt O'Riley diving and connecting a clean header at the far post, sending the Dons ahead in the dying minutes of the match.

The visitors had no answer for the goal, with the Dons claiming all three points for the first time since the 4-3 home victory over Northampton Town on February 20th, bringing an end to the recent skid the team were experiencing.