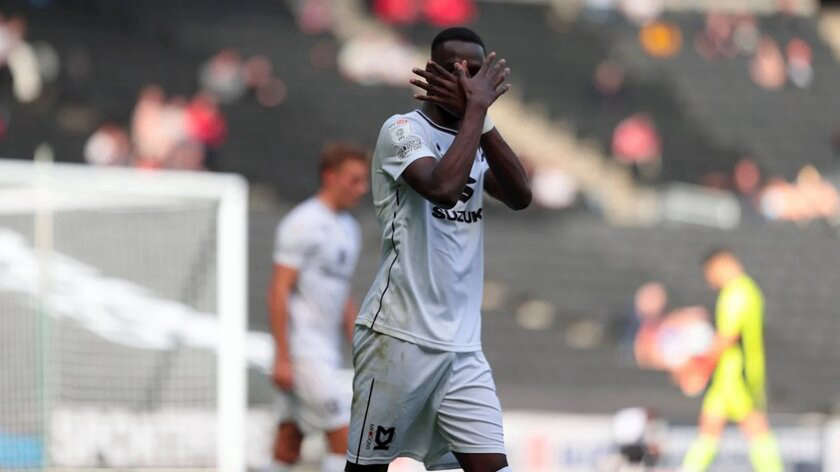 The Dons welcomed Accrington to Stadium MK after picking up four points against Charlton Athletic and Ipswich Town, hoping to continue their positive start under new head coach Liam Manning.

The opening five minutes of the match provided little in the way of opportunities, or threats, from either side, with both exchanging possession and spending the majority of the time in the middle of the pitch.

After suffering through the visitors' high press, the Dons began to show what they are capable of with some neat passing moves putting them in and around Accrington's penalty area - with shots the only thing missing.

The visitors fought back, however, earning consecutive corners close together, forcing the Dons into tough defensive situations - with a Harry Darling header and a rising David Morgan shot from far out keeping the sides level.

The Dons were lucky not to go 1-0 down on the 15-minute mark after Dion Charles saw his lofted effort curl away from danger.

The home side gifted the visitors with the ball, with a neat through pass allowing Charles to taking on Andrew Fisher one-on-one, but his tame effort fortunately missed the mark and kept Liam Manning's side holding onto the 0-0 score-line.

The Dons then themselves had an opportunity to open the scoring when Scott Twine's perfectly place pass found Mo Eisa with space to run.

The summer signing managed to get a shot off on the edge of the box, but it never tested goalkeeper James Trafford and went sailing over the bar.

A nervy moment came after the half-hour mark, with a scramble for the ball in the heart of the Dons' penalty area seeing Accrington have a number of opportunities to shoot, but a stout Dons effort forced the ball to Lewington, who managed to clear it - an ensuing effort from the visitors sliced and sent out for a goal kick.

Despite a number of questionable decisions going against them, the Dons opened the scoring just before the half-time break thanks to Mo Eisa's third of the season with the club.

Eisa received the ball on the edge of the box from Troy Parrott, avoiding a challenge and moving the ball onto his left foot before slotting his shot past Trafford and into the bottom corner - a lead the home side would hold onto as the first half was brought to a close.

Accrington started the second half brightly, winning a free kick that led to a long-throw opportunity - with the visitors causing plenty of headaches for the Dons with throw-ins throughout the match.

This time, it led to an opportunity deep in the Dons' area, which fortunately hit the side netting - the home side holding onto their slim lead in the opening minutes of the half.

The Dons were inches away from extending their lead after five minutes into the second half, with Eisa slotting a pass deep into the middle of the penalty area for Parrott, with the Republic of Ireland international unable to get a clean shot off.

His effort deflected back into the path of Twine, who was tripped as he tripped to capitalise, but the visitors were awarded a free kick deep in their area.

The Dons appeared to grow in confidence after the near-miss, with Twine and Parrott regularly linking up around Accrington's area, with Eisa substituted with an injury leaving Manning's side with just one man up front.

Things began to settle down after the hour mark, with both sides sharing possession but neither having any clear-cut chances on goal, with Tennai Watson's low-hit shot rolling along the ground and going wide.

The Dons had a threatening passage of play, breaking forward after an Accrington free kick with Parrott, Ethan Robson and Twine charging forward - almost unchallenged.

Parrott slots a pass to Robson, who ended up on the floor and earning his side a free kick 25 yards out. Twine's effort hit the defensive wall and O'Riley's rebound shot sailed high over the bar.

The visitors had the perfect opportunity to equalise in the 77th minute, when a pass awkwardly deflected off Warren O'Hora and allowed Joel Mumbongo to steal the ball and get a shot off one-on-one against Fisher, with the home side fortunate to see his effort go wide.

Twine tried to pick out a racing Hiram Boateng deep inside the visitors' box with just seven minutes remaining in the 90, but the ball rolled along the ground and was easily collected by Trafford at his near post.

Boateng turned provider himself when he picked out Matt O'Riley perfectly in the middle of the penalty box, allowing the Dons midfielder to slot home calmly and extend the team's lead to 2-0 with just five minutes left in regulation.

Despite an additional five minutes added on, the Dons held firm and did everything they could to see out the match and earn all three points. This saw the team climb the league table after securing seven points from their last three matches - building up a nice run of results early in the season.

The Dons' attention now turns to back-to-back away fixtures against Burton Albion in the Papa John's Trophy on Tuesday night and League One action against Cheltenham next Saturday.