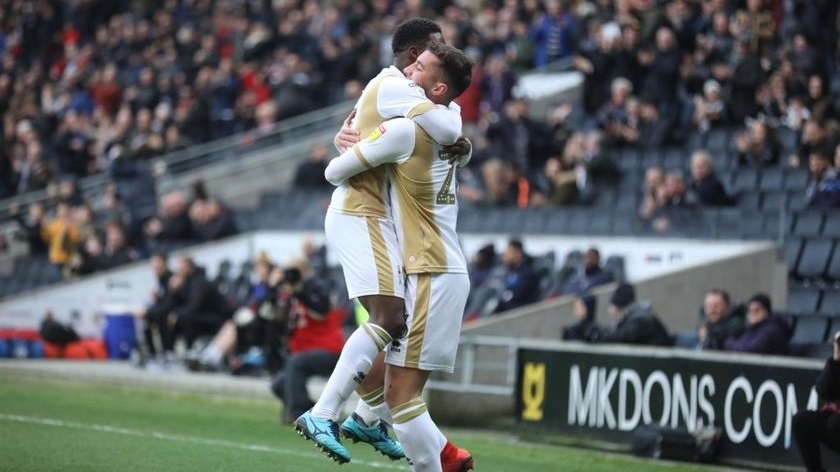 MK Dons kicked off the new year with a dominant 6-0 victory over Cambridge United, snapping their recent streak without a win.

The home side got off to a flying start thanks to a Rhys Healey header opening the scoring after just five minutes, connecting perfectly from Connor McGrandles' corner.

The Dons wasted no time on the offensive, pressing hard immediately after the kickoff, forcing the visitors into a corner - though nothing came of it.

But it didn't take long for Paul Tisdale's men to extend their lead, once again to a well-placed header, this time coming from Kieran Agard.

Defender Bailly Cargill this time was the provider, sending a clean cross into the box with Agard sending the ball beyond goalkeeper David Forde and into the far corner of the net.

Wary that a two-goal lead might not be enough to secure the victory, much like against Northampton Town this past weekend, the Dons extended their lead to three when Chuks Aneke smashed the ball in from just outside the six-yard box.

The goal once again came as a result of a cross, with the ball bouncing off a Cambridge defender and falling perfectly to the Dons' top goalscorer.

The visitors had a couple of close chances that could have easily pulled them back into the game, with the first coming just before the half-hour mark.

It was Ibhere again that came close, seeing another close-range effort bounce off a goal post with Nicholls firmly planted in the middle of the net, out of reach had the ball been just a few centimetres to the left.

The Dons went in at the half 3-0 up, with the fans in a buoyant mood and the team looking comfortable throughout.

This would not change after the two sides came back out for the second half, with the Dons scoring a further three goals to secure their biggest win of the season.

Some nice legwork from Healey once again resulted in a goal for the on-loan striker, with three Dons players pushing forward into the box, Healey placed his left-footed shot perfectly to slip underneath Forde - extending their lead to four.

The fifth goal came courtesy of an Agard penalty, which had been awarded after the Dons' record transfer signing was brought down trying to latch on to an Osman Sow cross at the far post.

There were some calls from the home crowd to give the ball to Healey, who had an opportunity to earn a hat trick, but Agard held on to the ball and coolly slotted home his second of the game.

The Dons dominated throughout the game and it was Sow that managed to add the sixth goal of the game, connecting with a cross and flicking the ball beyond Forde - earning the big Swedish striker his first goal of the season.

The result, which, along with a 1-1 draw for Lincoln City, has seen the Dons cut the points gap between themselves and first-place, and will do much to boost the Dons ahead of their 11-day break before travelling to face Bury on 12th January.