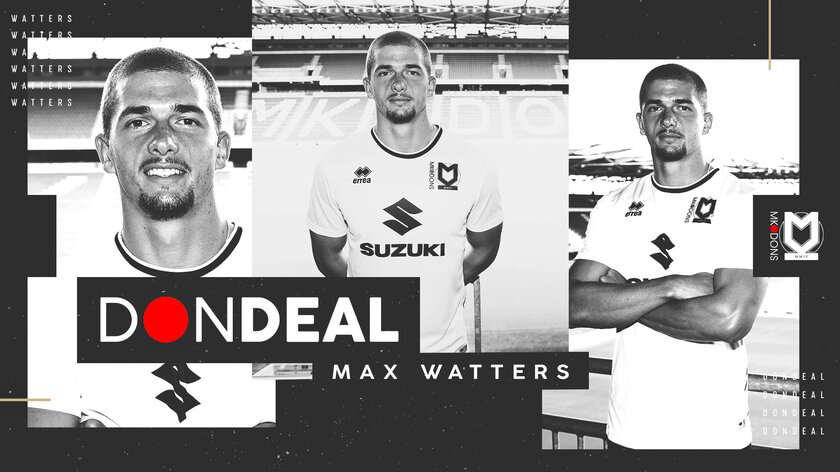 A deal for the 22-year-old had been reported earlier in the day, but it has now been confirmed by the club, who are getting a player keen on making an impact in front of goal.

Watters netted 16 goals in 19 total appearances for League Two club Crawley Town at the start of the 2020/21 season, earning himself a move to Championship club Cardiff City in January.

Now, he will be looking to put his prolific scoring record in the football league to use when he lines up for Russell Martin's Dons side this season.

Speaking of his decision to join, Watters said: “I’m really pleased. As soon as I heard about the interest, I wanted to get it done and I’m pleased it’s been completed early enough for me to settle in and meet everyone before the season starts."

"The manager has told me about how the team play and how he wants me to fit into that. It all appeals to me so much and it will help me develop too, with the way I like to play."

He added: "I’m a striker who likes to get in behind and be there in the box when the ball is coming in. I love to score goals and if you look at this squad, we’ve got some great players who can provide me with the chances to do that."

His new manager, commented: "This is a brilliant signing for us. We chased him in January before his move to Cardiff City and have retained that interest in him - he has retained interest as well and was keen to come here on loan this season."

"Mick McCarthy and Cardiff have been brilliant in helping to facilitate this move. They believe this is a great opportunity for Max and so do we. He will be a really good fit in our squad - he’s young, athletic and he’s a goal scorer too."

Sporting Director Liam Sweeting added: "We are really pleased to welcome Max to MK Dons and I’d like to thank Mick McCarthy and Cardiff City for trusting us with his development this season."

"It’s well known that we previously tried to sign Max in January but his outstanding form with Crawley saw him jump straight to the Championship."

"In that period, he showed exactly what he can bring to a team - his movement, anticipation and focus is all about getting in behind and scoring goals."

He concluded: "Meeting him yesterday, we saw how excited he is to get going under Russ and begin learning our style of play. We look forward to, hopefully, creating many goal scoring opportunities for him here at Stadium MK."