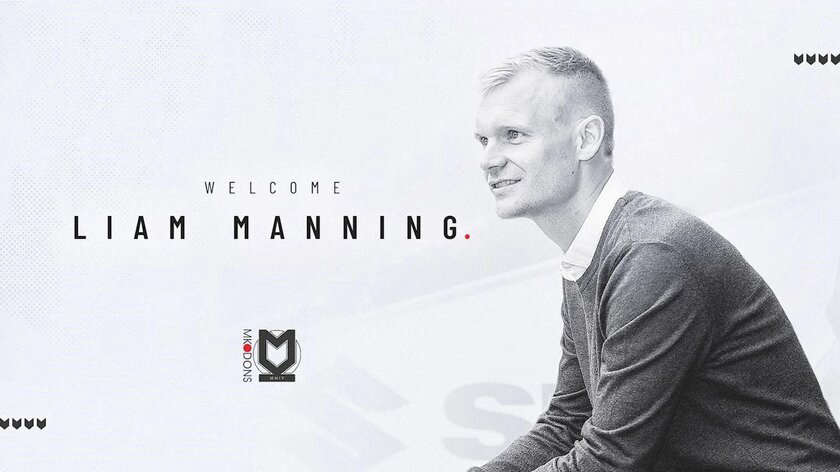 The Dons had been without a full-time head coach since the departure of Russell Martin almost two weeks ago, with club captain Dean Lewington taking interim charge to help the club through the transition.

Many people were linked with the vacant post at Stadium MK, with the likes of Lewington, John Terry and Jody Morris leading the bookmakers' odds early on before Manning rocketed to the top amid reports of negotiations ongoing.

Manning himself left Belgian club Lommel SK earlier this week in order to facilitate a move back to England, with the Dons the only expected eventuality as discussions took place.

Now, the 35-year-old has been named as the club's 12th permanent appointment since being established back in 2004, with hopes that his own attack-minded philosophy can work well with the squad available to him this season - with talents such as Mo Eisa, Scott Twine and George Parrott all looking to make a big impact in League One.

Speaking for the first time in his new job, Manning stated: "Firstly, it’s a privilege to be named Head Coach of MK Dons. I am thankful to the Chairman and Liam Sweeting for providing me with this exciting opportunity."

"CFG (City Football Group) were terrific for me and provided me a chance to go to New York and then to become Head Coach at Lommel - ultimately, though, this was too good of an opportunity for me."

He continued: "This is an ambitious Football Club that believes in playing a certain way - a way that the fans are used to and demand and one that I believe in too. We also have a squad full of quality and exciting players, who I can’t wait to get to work with."

"Me and my family are going to move here to live within half an hour of the area so that we can integrate ourselves into the community. That is important to me because, as we learnt last season, football is for the fans."

He concluded: "I am delighted to be your Head Coach – I am looking forward to getting started."

Chairman Pete Winkelman commented on Manning's appointment: "We are really excited to welcome Liam Manning to the Football Club. It has been a hectic couple of weeks but we are delighted to now be in a position to introduce him as our new Head Coach and be able to look forward to what the future can bring."

"We will give Liam and his coaching team all the support they need as they navigate their way through the frantic nature of EFL football and I am sure our supporters will do just the same, starting Saturday."

Sporting Director Liam Sweeting added: "I am delighted to welcome Liam Manning to MK Dons as our new Head Coach."

"Liam is someone we have known about for a while. He is an excellent coach with a really strong reputation for working with and developing young players and, as soon as we were granted permission to talk to him, it became evidently clear that he was the right man to take us forward."

"Liam’s work, not only in overhauling Lommel’s style of play but also finishing third in his first season, was extremely impressive and we look forward to seeing what he can achieve with our talented group this campaign and in the future."

Sweeting concluded: "I’d like to thank City Football Group and the staff at Lommel for their cooperation and professionalism. We do appreciate the challenge of replacing a manager at this time of the season and we wish them well with their process."