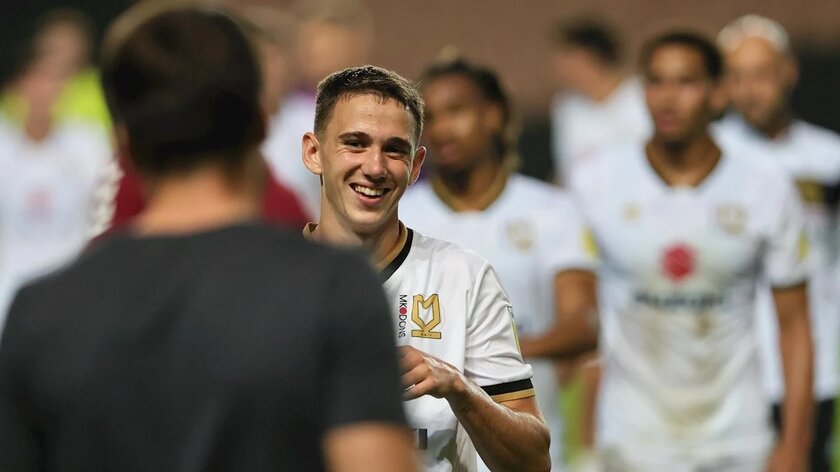 Milton Keynes Dons have today announced that former scholar John Freeman has signed his first professional contract at the club.

Freeman, 18, has been with the club since the age of 10 and after missing the 2019/20 season due to injury, was handed a scholarship extension by the club this summer.

Now, though, after impressing throughout pre-season, being handed the #30 shirt, and after stepping up when called into the first-team at the beginning of the season, Freeman has been handed his first professional deal and will remain with Russell Martin's team.

Freeman's signing makes him the ninth player to graduate from the club's academy in Martin's current first-team squad.

Speaking of his signing, Freeman told the Dons' official website: "I'm over the moon, it’s been my dream since I was eight since I first joined this club - I'm so excited to see what the future holds."

"It means so much because of the memories I have as a kid. My Dad and I used to drive from Stevenage to Milton Keynes and we’d always say imagine playing with Luke Chadwick and Dean Lewington – now I get to play as a professional with him on the pitch."

Speaking on Freeman signing, Martin commented: "John deserves it, he’s come back in really good shape, he’s a really good footballer and we knew that before. He’s had to overcome his injury problems and has shown so much resilience and mental toughness to get through the injuries and come through the other side."

"The chat I had with John in the summer was that I didn’t really see him being part of the plans moving forward as I didn’t think he was quite ready. He’s come back and surprised everyone in a positive way. He should be really proud of himself, I’m really proud of him."

He concluded: "His mentality is brilliant, he wants to train hard and get better. He’s a really mature 18-year-old. He really believes in his ability but he’s very humble. He deserves it, it’s another sign of us using and developing Academy players."