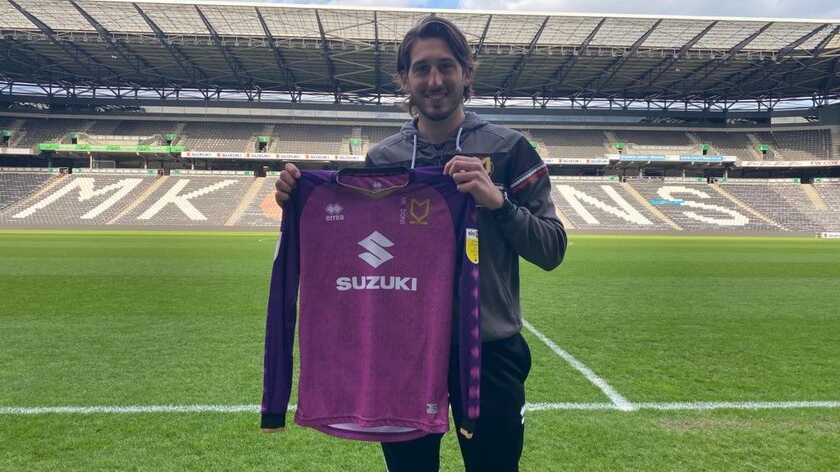 The 23-year-old, who began his career with River Plate in his home country of Argentina, joins the Dons after spending the final couple of months of the 2020/21 season training with the club.

Ravizzoli arrives at Stadium MK after playing the past two years with National League South club Eastbourne Borough, where he established himself as the first-choice between the sticks in consecutively shortened campaigns, making 33 appearances for the East Sussex club.

He joins a Dons side that has both Andrew Fisher and Laurie Walker signed for next season, with competition expected to be hot for the backup role behind current starter Fisher.

Speaking of his arrival at the club, Ravizzoli said: "I couldn’t be happier right now. Ever since I was a kid, I wanted to be a professional footballer. I am so grateful for the opportunity."

"I have enjoyed my time here so far - everybody has been so nice and welcoming. The goalkeeper union is brilliant and I’ve enjoyed working with Deano (Thornton), who has helped to make us better every day."

"I love the way that we play football; everyone who loves football, should love this way of playing. When I was in Argentina, I played for River Plate and I was taught to play this way, so it suits me."

He concluded: "The stadium is amazing, and I am looking forward to playing here in front of the fans. I can’t wait to get started."

Sporting Director Liam Sweeting added "Franco’s story and career so far show the kind of determination he has to succeed in the game."

"He proved himself while training with our first team at the end of last season and we’re both delighted and thankful to Eastbourne Borough that an agreement could be reached. It will be exciting to watch Franco’s development continue from here."

Goalkeeper Coach Dean Thornton also commented: "Franco was someone recommended to me and Russ, and people I’ve spoken to that have come up against him and they have all spoken highly of him."

"We had him training with us for the final few months of last season so we’ve had a good look at him. It was immediately clear that he had come from a good football background at River Plate, playing football the way we like to play."

He concluded: "He’s worked extremely hard to put himself in this position and we’re excited to make him a permanent part of our goalkeeping department moving forwards."