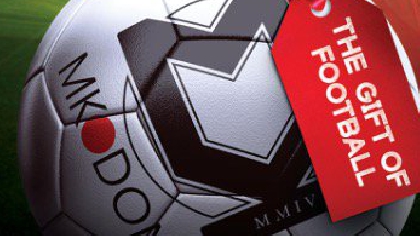 “The right to refund is indisputable and we will certainly honour that,” he confirmed in his interview with MKFM.

Clubs will soon vote to decide how the season will be completed – whether that occur on the pitch, likely behind closed doors, or with the campaign curtailed and the table decided on a points-per-game basis with promotion, play-offs and relegation left in tact.

Either way, Season Ticket holders look set to be unable to attend the final four home games of 2019/20 term and speaking on MKFM, Cullen was keen to stress that everyone will have the option to be compensated how they see fit.

“The right to refund is indisputable and we will certainly honour that,” he confirmed in his interview with MKFM.

“Earlier in the season, we lost the Bury game which meant Season Ticket holders got one game less in their package. We offered a refund but we also offered alternatives to help the Club as we had budgeted for the season based on season ticket income we’d brought in.

“It was remarkable and amazing that only 4% of our Season Ticket holders claimed a refund. We were extremely grateful for that, as it allowed us to plough on and continue with the season as we had planned to.

“Ultimately, though, refunds will very much be on the table for every Season Ticket holder but we will see what we can do for those who would prefer an alternative.”

He continued: “Of course, if we do continue this season then there is an option of providing games on iFollow MK Dons for Season Ticket holders to watch, definitely on a home basis but perhaps on an away basis too. We are exploring this with the league.

“We will come up a range of different options which will be ready to go as soon as we get clarification on what is happening. But, I want to assure people they won’t be left out of pocket – the Club feels very strongly about that.”

Despite the uncertainty surrounding football, the MK Dons supporters have remained loyal to their Club, with close to 4,000 Season Tickets already snapped up for the 2020/21 campaign.

“We have been overwhelmed by the response we’ve had so far,” Cullen told MKFM. “We’ve had encouragement on social media and through direct emails to the Club, and we are very humbled.

“The biggest measurable of our support from the fans is that 3,900 Season Tickets which have been sold for next season. If anyone ever needed to know how much Football Clubs meant to their community and their supporters, then Covid-19 has certainly underlined that special bond.

“I want to recognise that and say a massive thank you to each and every one of our supporters, whether that’s Season Ticket holders or those who support us in other ways. It’s magical and we do appreciate it.

“People are backing us and supporting us in a way that allows us to look forward.”