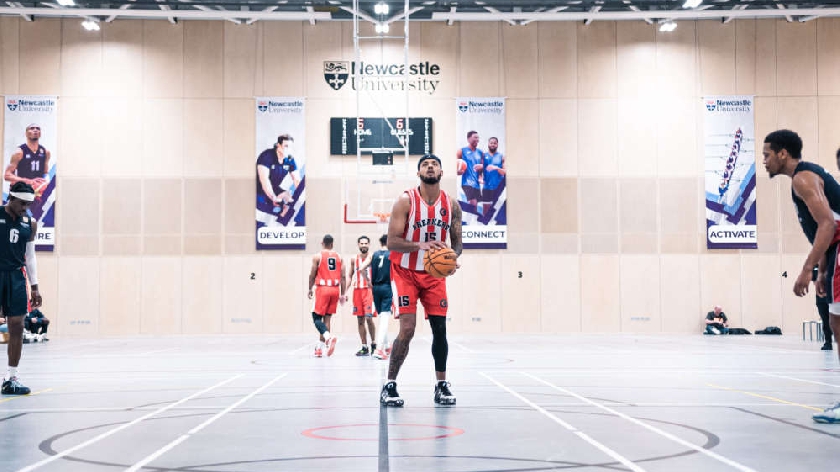 In what has become the normal for this special side, the Breakers were victorious twice in two days to stay undefeated in league play, improving to 7-0 against the Northampton Mavericks, as well as a stunning victory against NBL 1’s Newcastle University to reach the Quarter-finals of the National cu

Seven in a row

Breakers continued their charge for the D3 East title with yet another impressive display against a solid Northampton Mavericks team who sat at 4th in the D3 table heading into the fixture. The home-side came out of the gates strong, scoring an impressive 28 points in the first quarter to the Breakers’ 24. The Mavericks were led by Matthew Yates’ 27 point outing. The second quarter marked the start of an all-too familiar Breakers masterclass which saw them score 29 points and hold their opponents to just 8 points. Blayne Freckleton scored 12 of his 20 point tally in this quarter where the game was decided very early on. Mike New Jr. put another impressive performance together, posting 21 of his own points, 15 of which came from beyond-the-arc.

The Breakers improve to 7-0 on the season, making the case for an undefeated title run in their maiden season in the National League. The Breakers have turned themselves into one of the most formidable sides in the entire NBL pyramid, and they are showing no signs of slowing down.

The headline result of the weekend, MK Breakers continued their remarkable run in the National Cup with a thrilling victory against last season’s runners up, Newcastle University in the 5th round of the competition.

The squad made the journey to Tyneside early on Sunday morning, accompanied by 15 loyal fans who were rewarded by seeing their team take the victory in a true knockout-game thriller that went down to the wire.

Newcastle University are one of NBL D1’s premier sides, currently holding 4th place ahead of a number of stalwarts of the division, posing threats such as American import Jordan May, NBL D1’s third highest scorer with an average of 21.6 point per game, making an impressive 4 3-pointers a game on 46% 3-point shooting.

The Breakers started slow, managing only 2 points in the first 5 minutes of play. In what would turn out to be a forecast for things to come: Blayne Freckleton got the wheels of the MK contingent’s offence moving with a 3-point shot, closely followed by a basket from Dante Langley. 19-13.

The second quarter saw the Breakers find their feet, maintaining pace with the opposition from two divisions above. Mike New Jr was instrumental to the offence during this chunk of play: scoring 7 points as well as crashing the glass on his way to a double-figure evening in that category. New Jr. led all players in minutes, only resting for 17 seconds of play, ending the game with a huge 22PTS, 11REB on outstanding efficiency from the floor (53% FG). A collective team effort brought both teams level heading to halftime, 33-33.

The penultimate quarter of the game was the highest scoring, with both teams going back-and-forth in a very closely contested affair. Jordan Spencer led the way for the Breakers in this period, scoring 11 of his 19 points – 8 of which in succession before New Jr. would knock down a huge triple to bring the Breakers within 3 to end the 3rd. 59-56.

The final quarter is where the story of the night was written: for Newcastle, Tola Okiki put up a strong showing on the offensive end, keeping the game close right until the final whistle blew. For the Breakers, Freckleton and New Jr. maintained their hot shooting night – with Spencer contributing on both ends of the floor on his way to 6 assists and 6 steals.

The final moments of the game went right down to the wire: both teams going to war to take their team over the line and into the quarter finals. Okiki drained a huge triple to extend the Newcastle lead to 8 points, forcing Coach Beddow into calling a timeout with 2:05 left, in an attempt to dampen the momentum of the home-side. The Breakers would go on to outscore their opponents 12-2 in the final 2 minutes.

Coming out of the timeout, Freckleton drained a jumpshot to close the gap to 6, 75-69. One of Spencer’s 6 steals came at exactly the right time when he stole the ball from Newcastle, found New Jr. on the fastbreak who was fouled in a manner deemed unsportsmanlike by the officials. Both free throws would drop for New Jr. making the deficit 4, a two-possession game. The following sequence saw Spencer pulling the strings once again, who found Luke Gregory rolling to the basket for an easy lay-up: 75-73, 2pt game.

Captain Spencer continued with his clutch play: drawing a charge on Newcastle’s Jordan May. Okiki managed a steal from the Breakers and scored a lay-up in what was Newcastle’s only points of these final 2 minutes. An unbelievable play from MK-duo Spencer and Freckleton saw the captain find #7 in the corner for a heavily contested 3-point shot that saw him falling out of bounds in the process. 77-76.

Okiki cut through the Breakers defence looking to put the game out of reach, but New Jr. was able to prevent this with astonishingly quick thinking to knock the ball of the leg of his opponent where it would go out of play and reward the Breakers with possession. 24.1 seconds left.

Coach Beddow called timeout, drawing up a play that would see the hot-hand, Blayne Freckleton. Freckleton delivered the dagger when it counted: scoring under pressure once again in front of the Newcastle bench with just 6.3 left on the game clock.

Newcastle would call a timeout of their own, manufacturing a move for Okiki to drive to the basket who was spectacularly denied by New Jr in what was a game-saving block. Luke Gregory secured the rebound, was fouled and converted 1-2 from the FT line to close the game, 77-79.

Another monumental win for the Breakers senior men in their maiden season. Still yet to lose in all competitions, and headed on to the quarter-finals of the National Cup where they will face yet another huge challenge in the form of the Manchester Magic. If this team has proven anything over the season thus far, it’s that they are more than capable of stepping up to the plate and posess the ability to take victory in the grittiest of games.

I caught up with star-man Blayne Freckleton to get his thoughts on the game and what is driving the Breakers’ success this campaign.

EJ: Firstly, congratulations on the win. Another historic win for the club puts the Breakers through to the Quarter finals of the National Cup. How does it feel to cause yet another upset against a top D1 side?

Blayne: It’s obviously great to beat these teams. We play every game to win because we know what this group of guys can do.

EJ: The possession started with 24.1 on the clock in regulation, you guys break the press with a pass to Jordan who gets the ball over the halfway line. Did you always know you would be taking that last shot for the go-ahead?

Blayne: Just played what the defence gave us on that. We knew we [were] running this play as we [were] getting some good looks off it prior.

EJ: You played 6 seasons in NBL 1, how much did your experience of the division contribute to your performance on the evening?

Blayne: I think we have a lot of experienced guys mixed with some young guys too, it’s a good mix of talent. We all knew we had to trust the process and follow the scout; and we executed it in the last two minutes.

EJ: The Breakers are still yet to lose a game in any competition, if you could put the success of this team down to one specific thing, what would it be?

Blayne: I think it’s everyone’s sacrifices they make for the team. That’s players, to coaches to staff. Everyone is crucial to our success.

The Breakers have a rare weekend off next weekend, before heading down to University of Hertfordshire on Wednesday 14th December for their next league game. The Cup Quarter Final vs Manchester Magic is scheduled to be played on Sunday 18th December at Bletchley Leisure Centre, more information coming shortly.