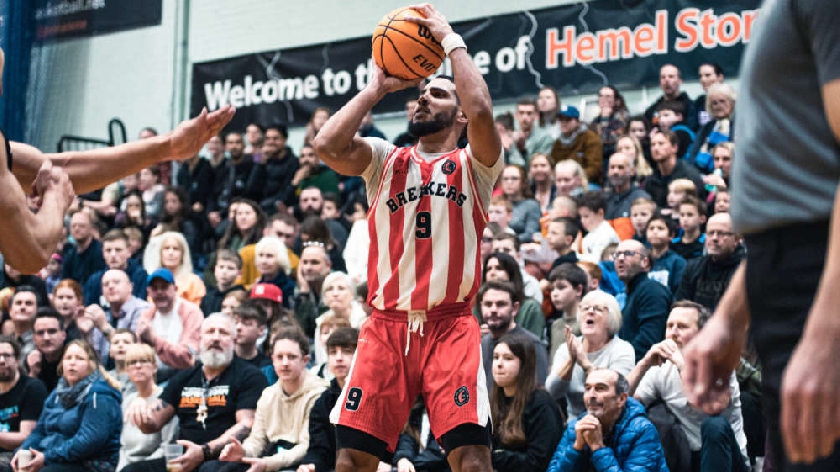 The Breakers fought valiantly in front of a raucous and sold-crowd at Hemel Hempstead Leisure Centre until the final seconds to get a result for the 200 travelling fans who made the journey to Hemel.

Ultimately, a trip to the finals was not and the Breakers became only the second team this season to lose to the Storm by single digits. Nonetheless, the game is one for the history books and one that Coach Beddow and the team will use as motivation heading into the remainder of the season and playoffs.

The first quarter set the tone for what was to come: a true battle. The Storm opened the scoring with an emphatic alley-oop play drawn up from the sideline inbound; dunked home by Storm’s second-leading scorer on the night, Aaryn Rai (26pts). The Breakers would get off the mark from the charity stripe after Breakers big-man Luke Gregory (6pts) was fouled in the act of shooting. The response from the Storm would be immediate when D1 import standout Hakeem Sylla (14pts) converted an eye-catching spin-move on his way to the basket. Mike New Jr. (11pts) would score the first field goal for the Breakers at the other end, the assist coming from star guard Dante Langley (19pts) to tie. The game’s leading scorer, Breakers captain Jordan Spencer (32pts), would score 7pts in the remaining minutes of the quarter, including a slick shot from behind the arc that energised the away fans.

In true Breakers fashion, the MK connection was felt when two of the hometown players, Blayne Freckleton (23pts) and Spencer, linked up for a nice play that saw Spencer cutting to the basket from the wing, found by a bullet pass from his teammate. The Storm closed the quarter out strongly, demonstrating their quality by scoring 28 points on what has been a highly proficient Breakers defence this season. Taylor Johnson (31pts) in particular showed why he is a frontrunner for MVP in NBL 1 this season, his effort on the glass is not to be overlooked in addition to his scoring. 28-15.

The second quarter was a high-scoring affair: the visitors put up 29 points, their highest-scoring quarter of the night, but would not be able to stop the hosts from getting 27 of their own. The quarter would be opened by a Freckleton basket over the much-bigger Sylla, drumming up ‘Let’s go Breakers!’ chants that rung resoundingly over the noise of the home crowd. A subsequent lay-up from New Jr. would bring about feelings of the deficit being erased but these hopes were quickly diminished by a Taylor Johnson and-one play. Academy standout, William Issekya contributed significant minutes as the first man off Coach Billy Beddow’s bench, including a steal that led to a pair of free throws for Freckleton. Langley, Gregory and Freckleton would keep the Breakers within touching distance in the latter stages of the quarter. Freckleton in particular converted a huge 3-point shot with 32 seconds left; secured a defensive rebound; and would end up drawing a foul on a heave in the dying seconds of the half.

Coming out of halftime, down 11, the Breakers needed to lock in defensively in order to secure a foothold in this game. They did just that. Taylor Johnson would have only 4pts, and the Storm 15 as a team whilst the Breakers continued to output at a commendable rate with 22 of their own. Freckleton propelled his team forwards with an early triple that was their first field goal of the quarter; New Jr. out-muscled Seth Swalve to bring the deficit back to 10 before Dante Langley would drain a difficult dribble pull-up 3 over Taylor Johnson to bring the Breakers within 7. The shift in momentum continued when what seemed like a sure-fire transition dunk for the hosts was disallowed for an offensive foul off the ball: game-on.

The Storm would reach 5 team fouls early in this quarter, leading Spencer to the line to shoot two and keep the deficit within single digits. The Breakers were impressive from the charity stripe in this game, getting to the line for 27 FT attempts and converting 21 of them: making more than their opposition would attempt.

Subsequently, Dante Langely would once again find success behind the arc when Storm defender Acquah-Davies was late covering him: 5-point game. A defensive lapse by the Breakers led to Tayo Oyefusi of the Storm to make his only field goal of the night, giving the home team some much-needed breathing room. After drawing a blank on the next offensive possession and conceding a lay-up in transition, Coach Beddow was forced to call a timeout to stop the bleeding.

This proved to be the right move for the visitors, as they would score immediately thanks to a clever cut by New Jr. along the baseline, losing his man and scoring over the help defender. The next defensive possession was huge for the Breakers: forcing travel and giving them the opportunity to go 2-for-1 in the remaining seconds on the clock. Making use of this opportunity, Captain Spencer would drain a huge 3-point shot on a mismatched defender, cutting the deficit to 4, a 2-possession game. The Storm would draw a blank on the next possession and Spencer would attempt another 3-point to bring the Breakers within 1 but it would not drop in the dying seconds. 70-66.

The final quarter of this cup semi-final was thrilling: in the opening seconds, Blayne Freckleton would be fouled on a mid-range jump shot and convert the free throws to bring the Breakers as close as they’d been since the beginning of the game, 70-68. The Storm responded as well as they could have done with Rai drilling a tough-to-stomach three-pointer in the left-hand corner, once again allowing the Storm to exhale. The Breakers would draw a blank on the next possession, with the Storm replying with another huge basket: and-one. 76-68. The Breakers would get back within 4 in the next couple of possessions and would stay around this number until about 5:40 to go where a gutting turnover was made. The subsequent play saw great defence lead to a missed Storm shot, the ball knocked loose and Spencer on the receiving end of a lot of contacts without a whistle. The Storm regained possession and Sylla would make a lay-up, 84-76. Coach Beddow called timeout to bring the Breakers together for a regroup, but Rai would once again come through when it mattered with a tough lay-up through traffic. An out-worldly banked three-point shot by Freckleton gave the Breakers hope but two turnovers in quick succession served as missed opportunities to bring the game within one or two possessions in the final few minutes. 90-79.

With 3 minutes left, Sam Newmann (17pts) drained a corner three to push the Storm’s lead to 14. 93-79. Freckleton, again, converted a shot from behind the arc, instilling some hope for a turnaround in the final 2 and a half minutes. Both teams were unable to score in the following possessions until Langley found Freckleton open in transition for an easy 2. The ball was then picked loose by the Breakers' defence and Spencer drilled a spectacular transition 3-point shot, bringing the visitors within 9. 95-86. A well-oiled defensive possession saw Mike New Jr. able to poke the ball loose and force a turnover in favour of the Breakers with little over 90 seconds remaining. Spencer would make the lay-up, continuing the Breakers' surge, 95-88.

The hope of yet another upset was truly crushed following a dagger three-pointer made by Seth Swalve, 98-88. The Breakers would score to bring the game within 5 but that’s as close as they would get. 98-93.

Despite the result, this is undeniably a monumental run by the MK Breakers in this tournament. Able to defeat 5 teams from higher divisions on their way to the semi-finals, this is a truly commendable feat in their first season as a team and speaks of what is to come. The run is nothing short of historic, and a testament to what the MK Basketball Club has built as an organisation, at all levels.

Tickets to the next Breakers home game on the 21st of January will be available shortly. Make sure you stay up to date on results, upcoming games and all other announcements via our social media channels.