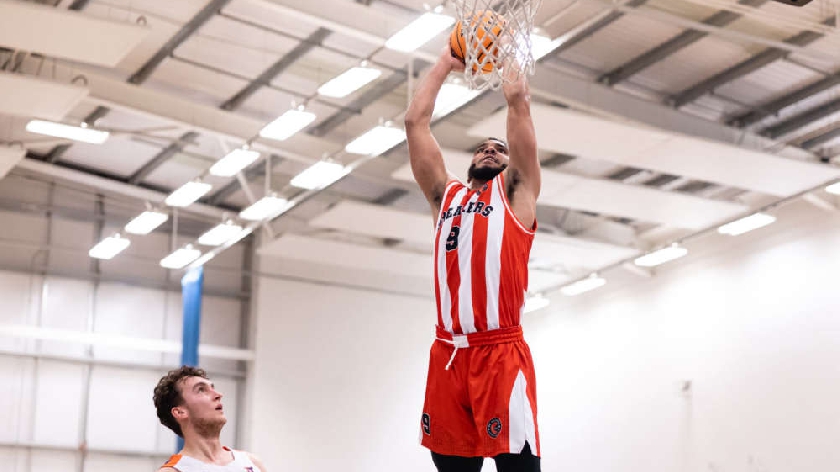 It was another winning night in Bletchley this weekend as the MK Breakers put on a monumental display against local rivals Northamptonshire Titans.

In a contest that saw the home-side score an astonishing 21 3-point shots, there was truthfully never a moment where the game was in doubt. Dante Langley (41pts) and Blayne Freckleton (32pts) combined for an immense 72 points, 39 more than the Titans’ squad scored across the four quarters. Breakers improve to 6-0 in NBL 3 East, in hot pursuit of 1st place University of Hertfordshire Storm, who’s sole loss came at the hands of the MK-side.

The scoring was opened with a shooting blitz from Breakers #7 Blayne Freckleton. The hometown hero found himself open behind the arc in successive plays to immediately make his mark on the game. Freckleton would score 5 of his 8 3-point shots in this quarter, and 19 of his team’s 36 point tally. For the visitors, Taiwo Hamilton (13pts) brought an abundance of energy on both ends of the floor as well as scoring 5 points. 36-18.

The 2nd quarter saw much of the same, with coach Billy Beddow looking to his bench to maintain the pace set in the first. With a huge matchup against Newcastle University in the National Cup approaching this weekend, it was important to balance the minutes in the interest of avoiding any unnecessary knocks for the Breakers. Kuam Aderonmu (12pts) and Scott Graves (19pts) both stepped up with some big plays, Aderonmu in particular scored a circus-like and-one 3-point shot to continue the offensive onslaught. 31-16.

The third quarter was the Breakers’ highest scoring of the season so far – putting up an eye-watering 49 points to the Titans’ 12. This quarter saw Langley and Michael New Jr. (18pts) score a number of extremely impressive 3-pointers from far beyond the arc, giving the sold-out crowd a reason to get loud despite the one-sided scoreline. Jordan Spencer contributed with some elite playmaking on his way to 14 assists, one of the highest tallies of the NBL 3 season so far. Another Freckleton 3-point shot rounded out the landslide quarter for the Breakers: 116-46.

The most noteworthy moment of the final quarter came late in the game when the crowd and Breakers bench were urging their team on to make the score differential 100, Dante Langley had an opportunity to do this as the buzzer sounded but ultimately the shot did not drop. 151-54.

The Breakers now turn their attention to this weekend where they first travel to Roade on Saturday to face Northampton Mavericks at 1pm, followed by a long journey to Tyneside on Sunday where they will face NBL 1’s Newcastle University in the 5th round of the National Cup. This game is guaranteed to be a thriller, if the previous encounter with D1 side Bradford Dragons is to be used as reference.