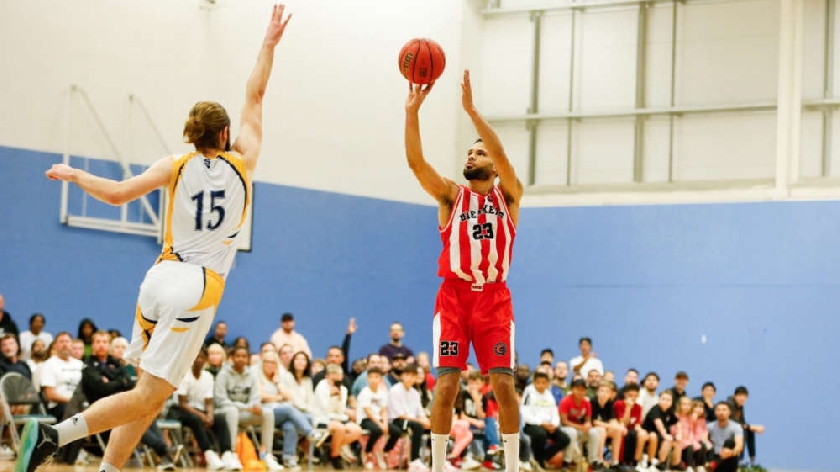 The Breakers continued their hot start to the season, improving to 3-0 in league play, after a victory against Anglia Ruskin University that appeared to be decided in the 1st quarter. Blayne Freckleton opened the scoring for the home side with 2/3 made free throws after being fouled whilst shooting on the perimeter. This was met by a 3-point shot from the away side’s Sam Horvarth. Once again, centre Luke Gregory was dominant in the early stages of the game – showcasing his offensive skillset with an intelligent pass to the game’s second-highest scorer, Michael New Jr, for an easy lay-up.

The first quarter saw a lot of end-to-end action, with the Breakers shining in transition play, showcasing an offensive masterclass that saw them explode for 34 points against ARU’s 10.

Breakers captain Jordan Spencer was pulling the strings for the home side on his way to a 12-assist night, finding his teammates for easy looks on the fastbreak. Academy product Buai Luak made his presence felt in the latter stages of the second quarter as he fought for rebounds and put himself in dangerous positions under the basket. Dante Langley capped off a superb first half for the Breakers with an impressive three-point shot that raised the roof of the Bletchley Leisure Centre. 62-22.

Blayne Freckleton, the game’s leading scorer, truly found his rhythm in the third quarter, sinking two of his five triples in quick succession to further extend the Breakers' already-huge lead. For the away side, a change in tactics from coach Georges Mompoint saw Roshan Gurung taking much of the playmaking responsibility. Ultimately, not much could be done to nullify the Breakers’ vice grip on the game. The seamless link-up play between Spencer and New Jr was made most obvious by an outstanding transition play where the Breakers captain seamlessly stormed past the ARU defence to find his teammate for an easy lay-up that made up two of his nineteen points on the evening. Freckleton put the exclamation point on the quarter with an emphatic block on ARU’s Gurung which had the sold-out crowd elated and raucous. 81-29.

The fourth quarter saw much of the same, as Coach Beddow’s side saw the remainder of the game out professionally. Academy prospect Ethan Ratcliffe had the play of the game with an electrifying dunk off a great pass from his captain in a move that truly raised the roof and capped off another emphatic win for the still-undefeated Breakers. 110-45

The Breakers’ next game is away against the Essex Rebels on the 5th of November in what promises to be another exciting encounter. The Rebels currently sit at 2-2 on the season and, as such, will be looking to put themselves over .500 against the undefeated Milton Keynes side.

The Breakers’ return to home action on the weekend of the 12th and 13th November as they first take on the University of Hertfordshire Storm on the Saturday, before hosting NBL Division 1 side Bradford Dragons in the 4th round of the National Cup on Sunday.