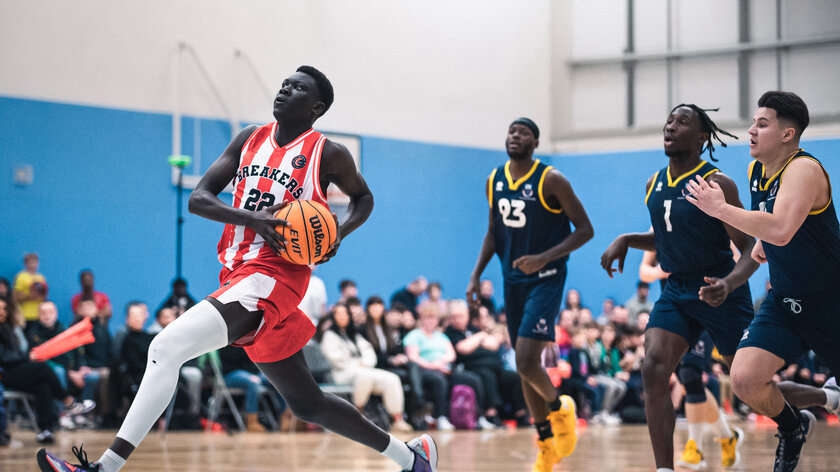 The Milton Keynes Breakers improved their undefeated record in NBL3 East this past weekend with a dominant 69 point vicory over the University of East Anglia Panthers, 113-44.

Bletchley Leisure Centre was once again sold-out for the Breakers’ first home game of 2023 that saw the home-side cruise to victory as they set their sights on the NBL 3 East title.

The game’s highest scorer, Luke Gregory (21pts), would get the Breakers off the mark with an easy left-handed lay-up after catching his own miss. A sign of things to come as the Breakers would manage a hefty 16 offensive rebounds out of their total 42 on a night where they dominanted the glass.

The young visitors appeared to find an early rhythm from the 3-point line, sinking two on their first two possessions of the game, but Coach Billy Beddow’s men quickly made the adjustments to tighten the defensive scheme. The crowd was brought to their feet by a nice play between Breakers stars Jordan Spencer and Dante Langley: the captain found his teammate darting into the protected area unmarked, and the Breakers #9 would slam it home with authority. 34-16.

The second quarter saw the Breakers hold their opponents to only 6 points, a stifling defensive display that fans have become used to seeing in the team’s maiden season. Contributions from academy duo Ethan Ratcliffe and Eric Arriaga built early momentum as the visitors went scoreless. Building on from this momentum, Coach Beddow opted to bring on another academy prospect, Dior Ikbar for his debut on the men’s team.

Ikbar would score his first point as a Breakers player after a well-earned trip to the free-throw line; but it would not take long for the young forward to make his mark on the game. After attracting a double-team, Jordan Spencer found Ikbar open at the top of the key, and without hesitation, the debutee drove straight to the basket and slammed it home, much to the delight of his teammates and the crowd.

It was a great night for the Breakers academy players with Buai Luak playing heavy minutes on his way to a career-high 20 points and William Issekya scoring 14 as the starting 2-guard in Blayne Freckleton’s absence. 65-22.

The second half started much like the first, with Luke Gregory scoring with his left once again, to continue the relentless offensive output of the Breakers. Another Langley dunk early on would continue to spur the Breakers onward as the game became an increasingly foregone conclusion. Issekya buried an all-net triple on his way to 4 on the evening, shooting an impressive 57% from beyond the arc. 88-29.

In the final 10 minutes, the Breakers saw the remainder of the game out professionally and in-style. Luak was the standout in this period, dominating on the defensive end of the floor and scoring half of his total tally. Particularly impressive was his effort on the glass: 4 offensive rebounds out of a total 7. A stat demonstrating that there was no drop-off in effort despite the wide margin the team was enjoying. Coach Beddow’s men improve to 10-0 on the season and sit at the top of the NBL 3 East standings. 113-44.

The next challenge for the MK Breakers will be a top of the table clash against 2nd place Kent Crusaders on the 28th January, 5pm tip off at Bletchley Leisure Centre.