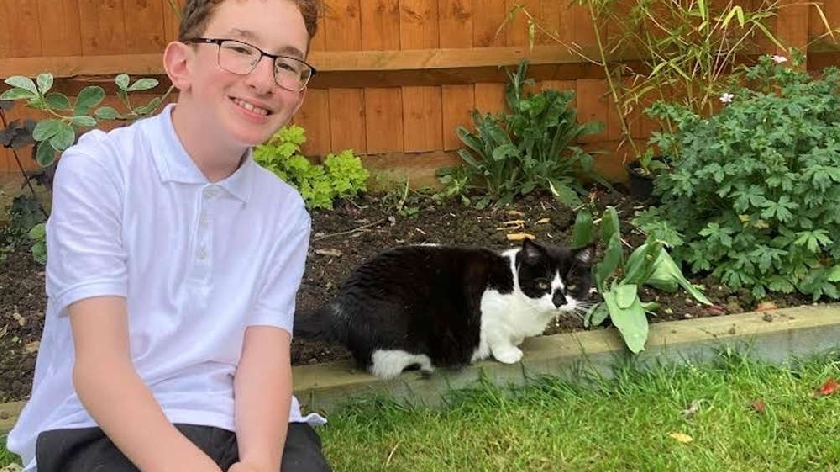 A young cat-lover has found a solace in raising funds and awareness after the death of his family’s cat from a preventable but often overlooked illness.

Alex Vrondis, 12, set about raising awareness of urinary problems in male cats after his cat Felix had to be put to sleep owing to complications from a blocked urethra - the tube connecting the bladder to the outside.

He explains: “I lost my loving cat Felix in February 2020. Felix was a cat who went to the toilet outside but one day he had an accident in the house and when my mum was cleaning it up she saw blood and we took him to the vets. We hoped they could help him but by the time we noticed it was too late.”

Feline Lower Urinary Tract Disease (FLUTD) is the name given to a collection of common conditions that affect the bladder and/or urethra. Males like Felix have a greater risk of complete urinary tract blockage.

Alex’s mum, Julie Smith, adds: “The vets tried for a few weeks to unblock Felix by leaving a catheter in but it was soon clear the blockage was too severe so we allowed them to operate but the urethra was so damaged there was nothing they could do. It was a heart-breaking decision to let him go but he was in pain and it wasn't fair to leave him like that.”

Cats with FLUTD usually show one or more of the following signs:

A urethral obstruction should be dealt with as a medical emergency because as well as being painful it can be life-threatening.

After learning that earlier intervention might have made a difference to Felix’s chance of recovery, Alex was determined to raise awareness of the problem among friends and family and asked for donations for needy cats while he explained the risks. Alex drew a poster which he distributed to his local RSPCA and vet surgeries.

Alex raised £53 during his campaign and decided to donate it to Cats Protection’s Milton Keynes Branch after meeting volunteers from the branch at their stall at Pets at Home in Buckingham. He and Julie were then invited by the branch to visit one of their fosterers to find out how his donation would be used and what happens behind the scenes at the charity.

Alex adds: “My family and friends were very generous but lockdown came and I couldn’t give the money to Cats Protection. We forgot about it until I met a nice lady called Sarah who volunteers there. We gave her the money and afterwards I got to meet April who fosters cats. I love cats and now I want to foster cats when I grow up.”

Branch Committee Member, Belle O’Connor, says: “We were so impressed by Alex’s hard work to ensure other cat owners know about the risks of a blocked urethra in cats, especially male cats. We know it will have been a sad lockdown without his beloved Felix but hope he takes comfort knowing that the funds he raised will help us care for local cats and that his message will hopefully help other owners ensure their cats receive swift treatment if they show symptoms of complications.”

Urethral obstruction is reported to mainly affect young to middle aged cats who are almost all males because their longer and narrower urethra, compared with females, is more likely to lead to urethral obstruction.

For around 60-70 per cent of cats suffering from FLUTD no underlying disease can be found. These cats are said to have inflammation of the bladder without known cause. In male cats, inflammatory debris and pain may lead to a blockage of the urethra. The presence of urinary crystals or stones may also create a urethral obstruction.

Alex and his family have adopted another cat named Coco and he will continue raising awareness of the condition.