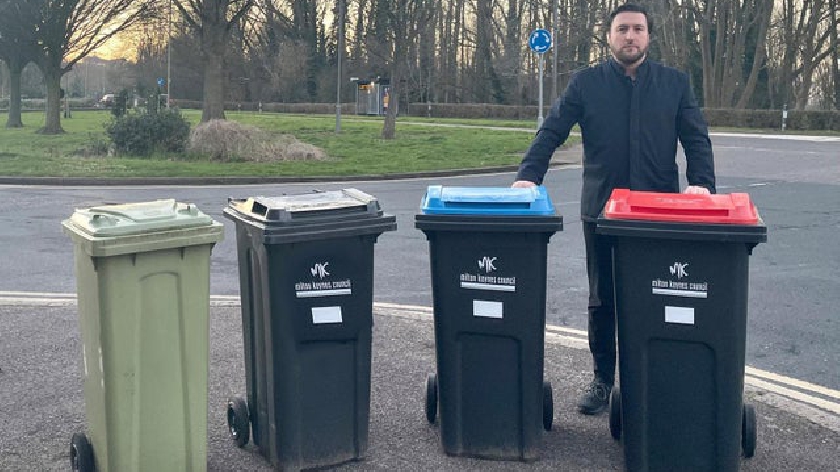 Despite manufacturing challenges, MK Council is still on track to move from one waste contract to another next year.

Milton Keynes Council is starting a new contract to pick up waste and recycling from MK’s 119,000 homes from next year.

During this change, most Milton Keynes households will make the move from plastic sacks to wheeled bins, following a pilot involving thousands of residents.

Milton Keynes Council say that bringing in wheeled bins should lead to less street litter, higher recycling rates, and will be better for the environment, saving on the production of millions of plastic sacks.

More than 300,000 bins and accompanying waste vehicles will also need to be manufactured and delivered to Milton Keynes for summer 2023 in a massive logistical operation.

MK Council says it plans to make the changes as smooth as possible for local residents. Yesterday, a formal decision was made to include a handover period between the contracts.

This will allow any new contractor to seamlessly take on their responsibilities.

A decision on which contractor will work with the Council on the new contract will be announced in November.

Although much is changing, the council says weekly recycling and non-recyclable waste collections will continue in Milton Keynes.

The bin for paper and card has a red lid and the bin for plastic, metal and glass has blue, in a nod to Milton Keynes’ original trial of kerbside recycling in 1990 (the first in the UK) which also had ‘red and blue’ collections.

Milton Keynes Council is making separate plans for households where wheeled bins would be too difficult to use.

Cabinet Member for the Public Realm, Cllr Lauren Townsend said: "There’s a lot of work going on behind the scenes to make sure this massive operational programme stays on track. The pandemic and many other global issues have put significant pressures on manufacturing and the supply chain, so we were right to start our planning so early. I’m looking forward to seeing the new bins arriving in Milton Keynes, and helping local people recycle more confidently."

From September, local people and interested organisations will be able to subscribe to dedicated news and information about the upcoming waste and recycling changes on the Council’s website.